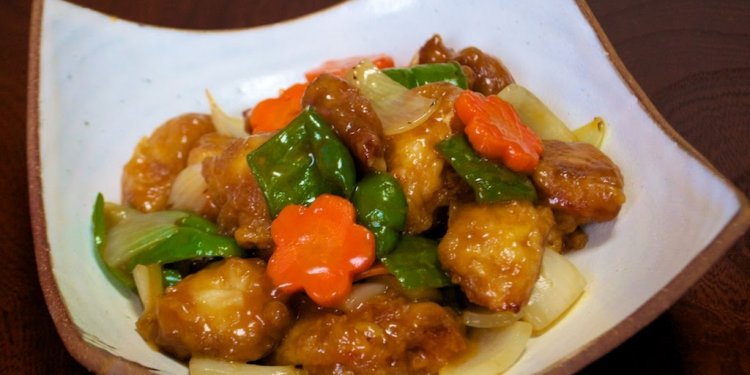 Sweet and Sour pork or Chicken When I decided to visit Taiwan for two weeks to learn about their food culture, my boyfriend could not have been more excited. He's the type that can eat Asian cuisine 24 hours-a-day, seven days a week. (Unfortunately I'm the opposite. I could survive off of pizza for the rest of my life but only prefer takeout every few months.) He eagerly hoped that I would return with not only a new found passion for Chinese food, but all the secrets to their cooking, as well.

Luckily for him, I did return with a few new tricks up my sleeve and an arsenal of recipes to try. And after tackling this incredible sweet and sour chicken, he just may get more than he bargained for.

Taiwanese cuisine is a delicious mix of Chinese, Japanese, and Aboriginal styles, which leads to a very exciting — and unique — food system. Fresh seafood is predominant, but pork, chicken, and fresh fruits and vegetables are also widely used. During my travels I experienced countless meals, snacks, and beverages ranging from Hakkanese (my favorite!), to Cantonese (the most Western), to Fukian (the most prevalent). On many occasions the dishes presented were completely foreign to me, but every so often a very familiar Sweet and Sour Chicken would appear, often as welcome as a bowl of unadulterated noodles or white rice. After enjoying several memorable dinners that included the well known recipe, I knew I had to make it at home. The sweet and sour flavor profile — often referred to as "the people's sauce" — is very prevalent throughout Chinese cuisine. The traditional version is usually composed of sugar or honey combined with rice vinegar, soy, and ginger or cloves. The Westernized version, borrowed more specifically from the Cantonese, includes the addition of ketchup, pineapple juice, pineapples, and bell peppers. In order to find my ideal sweet and sour, I spent a whole afternoon testing a variety of sauces and flat out making a mess of my kitchen (hello type-A!).

I made both a traditional sauce as well as a westernized sauce, and in the end the addition of pineapple juice won my favor. Next I made a batch using chicken (cut into large 1-inch pieces) tossed with sauteed red and green peppers, to compare against a batch using pork (cut into smaller 1/2-inch pieces) mixed with sauteed pineapple. The true test of deliciousness would all fall into the hands of my boyfriend, the self-declared guru of all things sweet and sour. He ate firsts, then seconds, and even thirds before declaring both the chicken and pork versions better than any restaurant version he'd ever had! Talk about a man in pure Chinese food heaven.

In the end, I love the idea of travel as a way to discover new things in your own kitchen. I had so much fun attempting this dish and cooking outside of my usual recipe box. I can't wait to tackle the next one; I've got a few more traditional Taiwanese recipes coming soon! What about you? What are your favorite recipes you recreated because of travel?

Sweet and Sour Chicken (or Pork)

For the marinade, whisk the soy sauce, rice vinegar, and cornstarch together in a medium sized bowl. Add the chicken and chill for 30 minutes to an hour.

Heat a couple of tablespoons canola or vegetable oil in a heavy dutch oven over medium-high heat. Sauté the bell peppers and pineapple until tender, about 6 to 8 minutes. Remove the vegetables from the pan and set aside.

Wipe out the dutch oven and fill with 3 to 4 inches of peanut oil. Heat the oil to 375°, keeping a close watch on the thermometer making sure not to exceed this temperature.

For the frying batter, combine the flour, cornstarch, salt, and baking soda in a large bowl. Add the egg whites, canola oil, and water and whisk until the mixture is thick and sticky (almost glue-like). Stir the marinated chicken into the fry batter until every piece is completely coated.

Working in batches, fry the chicken until crisp and golden brown, about 2 - 3 minutes per batch. The coated chicken pieces will want to clump together in the oil, so I like to put in each piece one by one. The oil temperature will drop to approximately 350°, which is the temperature you should maintain while frying. Be sure to adjust the heat accordingly.

Using a spider, remove the cooked chicken to drain on a sheet pan lined with paper towels or a large brown paper bag. Return oil to 375° before continuing on to the next batch. When all the chicken is fried, return oil to 375° and begin the sweet and sour sauce.