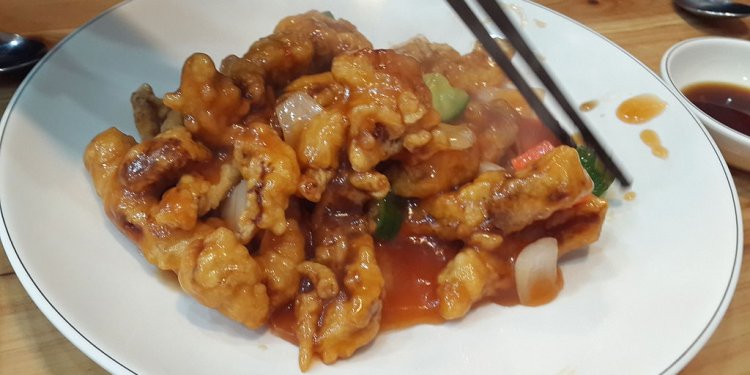 Cooking Instructions:
Step 1: Put cubed pork in a bowl, and season with 1 teaspoon salt, ¼ teaspoon sugar, and 1 teaspoon soy sauce. Mix in the green onions and egg white. Cover, and put in the refrigerator to marinade for at least 1 hour. When finished dust chicken with 1/2 cup of corn starch until evenly coated.
Step 2: Heat 1 quart of oil to 375 degrees in your deep fryer or wok. Fry pork in oil until evenly browned (should be about 10 minutes per batch). Drain on paper towels.
Step 3: Heat a tablespoon of oil in your wok over medium heat. Stir fry celery, onions, and green peppers, cook until tender. Season with sugar and salt – remove from pan and set aside.
Step 4: To make the sweet and sour sauce- In your wok (or saucepan) mix 1 cup of water, ¼ teaspoon salt, ¾ cup sugar, 1/3 cup apple cider vinegar, ¼ cup ketchup, and ½ teaspoon soy sauce. Bring to a boil, and stir pineapple chunks with juice. Return to a boil and mix 2 tablespoons of cornstarch in ¼ cup of water to thicken the sauce. Cook until thick and well blended. In a bowl pour sauce over fried pork, and add vegetables and mix well.