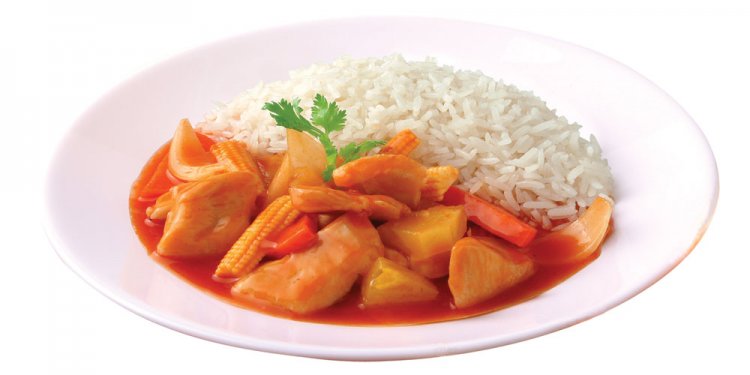 In most Western countries New Year means consuming high doses of alcohol, but in China the focus is on food and family.

In most Western countries New Year means consuming high doses of alcohol, but in China the focus is on food and family.

To honor the New Year, which is considered the most important festivity of the year, the Chinese people cook up a feast like no other.

Among the traditional foods that are made for the Chinese New Year’s feast are dumplings, fish, spring rolls, noodles etc. The list is long and plentiful.

The dishes are not randomly picked, but each of them should ensure that the new year will come prosperous and happy.

Since one of the luck-bringing colors is red the sweet-and-sour sauce might be served with at least one dish. Those of you who don’t know it yet – the color of the sauce is also red.

However the truth is that while the Chinese do use sweet-and-sour sauce they mostly serve it with fish or seafood. To serve it with meat is a rather new custom. Also the sauce itself might taste totally different from what are used to.

And even though the sweet-and-sour pork is becoming more and more common in southern China, especially Hong Kong, it is still a westernized dish that’s a far cry from the “traditional” Chinese cuisine.

Not to mention the sweet-and-sour pork that we order from the Chinese restaurants here in the West. I think it would be a grave insult to call that a traditional Chinese food…

The famous chef and cookbook author Eileen Yin-Fei Lo writes in “The Chinese kitchen” that the Western version of sweet-and-sour pork is nothing like the dish you might get in China. She sees the main fault in the sauce which is often too sweet and almost glue-like.

So if you do want to eat the undoubtedly delicious sweet-and-sour pork, do try out a recipe by an actual Chinese chef, rather than a recipe from some Western cookbook. There’s no shame in eating westernized Chinese food, but at least I would prefer the taste to be as close to the authentic as possible.

Not so traditional after all

The sweet-and-sour pork is also widely known as a “traditional Chinese New Year’s food”. After talking to a few of my Chinese colleagues I found out that this statement is not quite true.

According to my sources, not only is the sweet-and-sour pork not considered a traditional Chinese food, it’s not a traditional New Year’s food either.

I would suspect that the tradition of eating sweet-and-sour pork during New Year might be somewhat common in America. You most definitely can order a batch of it in any Chinese restaurant that’s located in Europe or the States.

In conclusion I would say that although the sweet-and-sour pork is by no means a Chinese classic, it is a classic of the Chinese restaurants here in West. It tastes really great and is surprisingly easy to make, so why not make it at home.

1. Combine the batter ingredients in a big bowl, mix until smooth. (If the batter is too dry add more water, the consistency should resemble to a pancake batter.) Set aside.

2. Combine the sauce ingredients in a small bowl, set aside.

3. Toss the pork cubes in flour. Then transfer to batter and mix to coat them evenly.

4. Deep-fry pork in batches over high heat for a few minutes, until golden brown. Remove from wok, using a slotted spoon and drain on kitchen paper. (If desired you may deep-fry the pork one more time to get it extra crispy.)

5. Pour off the oil and clean the wok. Then heat it up again and add a tablespoon of oil. Stir-fry garlic, onion, bell peppers and scallions for 2-3 minutes. Add the sauce ingredients and bring it to a boil. Add pork and stir well. Serve with rice while the dish is still hot.