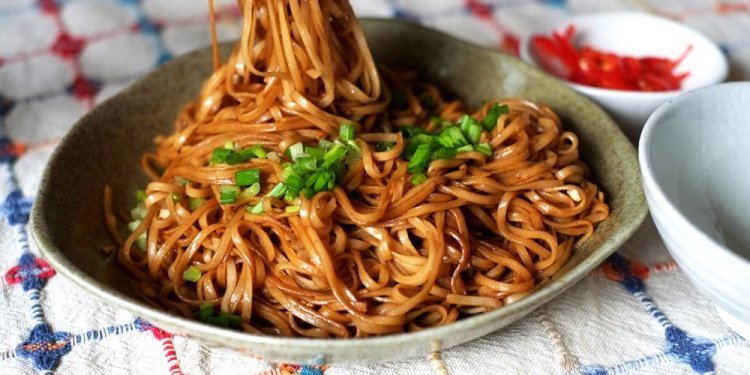 Description Estimated Cooking Time Arrowroot vermicelli Thin white, semi-transparent noodles that are made from arrowroot starch. They are similar to cellophane noodles in appearance. Cook for 2 to 4 minutes, until tender. Long egg noodles that have been precooked and dried before packaged. They are found as flat or round noodles and because they are precooked they require only a short cooking time. Cook for 3 to 4 minutes.

Cellophane noodles are thin translucent noodles made from mung bean starch. Also known as bean thread noodles and glass noodles. The dried noodles have a slippery texture when cooked. The noodles should be soaked before cooking. Cellophane noodles can also be deep-fried. They are sold in bundles.

To prepare: Soak by placing the noodles in a heatproof bowl and pouring hot or boiling water over them. Let them soak for 5 to 15 minutes, just until tender. If adding to a soup, it is not necessary to soak the noodles before adding them. Do not soak if you are deep-frying the noodles.

Cooking Time: Cook the noodles by adding to boiling water and cooking for 1 to 3 minutes.

Long noodles made with wheat flour and eggs. They are available as a round noodle in various thicknesses and can also be fond as a flattened noodle in various widths. Chinese egg noodles are golden yellow in color and generally found wrapped tightly in a bundle or nest. They should be cooked similar to Italian egg noodles.

Long round or flat noodles made with wheat, water and salt. They are found in various thicknesses and are generally white or light yellow-beige in color.