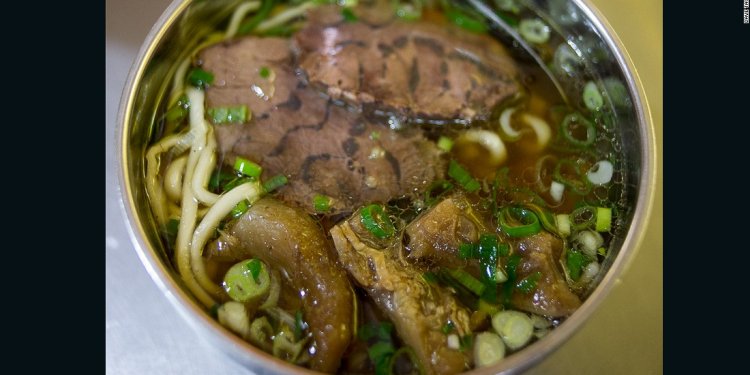 Long noodles are an auspicious harbinger of long life in Chinese tradition.

The pasta wars have raged between partisans crediting either Italian or Chinese invention of the noodle, with sorties by fervent believers in the Arab origin of the slender carbohydrate staple. Recent archaeology seems to have given pride of invention fairly conclusively to the Chinese, who can also claim gunpowder, silk, paper, compasses and quite possibly the novel and global circumnavigation. But the actual noodles unearthed at a 4, 000-year-old Chinese site are not your average mei fun.

Marco Polo doubtless enjoyed many a fine meal in the palace of the Chinese emperor in the 13th century. It is very probable that he successfully transported a dried version of the noodle back to Italy. But when Polo was in China during the Yuan Dynasty, noodles were already a common dish in both northern and southern regions of the country. Their origins were apparently much older. Early Chinese noodles were both startlingly similar and significantly different from the stretchy, chewy varieties served today.

Pompeii on the Yellow River

Four thousand years ago, some epic disaster wiped out the city of Lajia on the Yellow River with cataclysmic speed and thoroughness. The earthquake and subsequent river flooding, or whatever caused the site to be buried, overturned a pot, accidentally preserving a nest of long yellow strands of noodles under a wall of mud. When the noodles were discovered in 2005, their existence pretty conclusively ended the argument about who had the earliest claim to the invention. Before the Lajia noodles, the earliest record of noodles is a mention in an East Han Dynasty book dated between 25 and 220 A.D., written evidence that did not satisfy historians about whether noodles first graced a Chinese, Italian or Arabian bowl.

A Nest of Noodles

Early Chinese noodles, the ones mentioned in the Han Dynasty account, were shaped into bits of dough that were then cooked in broth or boiling water. They were almost dumpling-like, not stretched into strands that were either cooked in broth or wok-fried. But the Lajia noodles were long yellow strands and the most surprising thing about them was their ingredients. Ancient China did know wheat, but cultivation was extremely limited until the Tang Dynasty, which began in the 7th century A.D. The Lajia noodles, 2, 600 years older, were made of two varieties of ground millet: broomcorn millet and foxtail millet. Both kinds were necessary to create a sticky dough that could be pulled into strands or strings. And millet, a grain indigenous to China, was grown everywhere in the country as far back as 7, 000 years ago.

The old ways are still the best ways when it comes to handmade. Noodle makers still knead, twist, braid, loop and stretch the dough several times before breaking off a worked chunk to stretch into a long skein of dough. The strands are pulled into very skinny noodles - called xi - or left wider, called cu. Noodles must have both a springy and a chewy texture to please experienced palates and one way to get the dough exactly right is to use an ash that contains potassium carbonate, which affects the wheat gluten in the dough. It's not clear whether the Lajia noodle makers were on to that trick, but the basic knead/stretch/pull method gave them millet noodles during the late Neolithic period that look much like a dish in your local Chinese restaurant today.