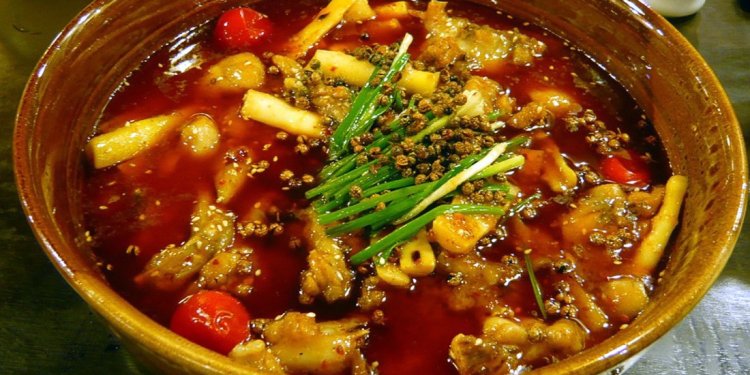 Moo shu pork. General Tso’s chicken. Egg foo young. You may have grown up calling these take-out specialties Chinese food, but any mainlander will quickly rebuff that claim: These dishes are thoroughly American. In the span of a century, Chinese food in America has warped into something completely unrecognizable to the people who brought it here in the first place. And in that time, orange chicken with a side of fried rice has become just as important to the American diet as hamburgers and pizza. As historian Jennifer 8. Lee points out in The Fortune Cookie Chronicles, there are now more Chinese restaurants in America than McDonald’s, Burger King, KFC, and Wendy’s combined.

Most of them don’t serve real Chinese food, purists will argue. But Americanized Chinese is just as worthy of investigation as the “authentic” Chinese classics. Chop suey was invented in the 19th century by San Francisco chefs who threw a bunch of ingredients in a stir-fry pan and unintentionally started a craze; around the same time in China, an elderly grandmother in Sichuan was making a never-seen-before dish with soft tofu, ground pork, and chili that would later be known as mapo tofu. The soup dumpling was also invented around that time in 19th-century Shanghai. All of these wildly popular dishes were originally created by Chinese chefs for the Chinese people, yet only one of them is deemed a bastardized version of Chinese food. While America’s fascination with regional Chinese food continues to grow, it is also important to acknowledge the profound impact of these earlier iterations of the cuisine in the U.S., and the forces that helped popularize it. From chow chow restaurants marked by yellow flags, to the allure of a Lazy Susan, here are some of the major developments that helped launch American-Chinese food into popular culture.

The first Chinese immigrants to the U.S. came mostly from the city of Taishan in the southeast coastal province of Guangdong. It was an area of China ravaged by rebellion, with little economic opportunity and a humble food culture. The cuisine consisted primarily of basic stir-fries with rice and vegetables, plus whatever meat was available. Flavor profiles veered toward the sweeter end. This fare established the foundation of Chinese food in America. The effects of this immigration wave in the United States, from an economic standpoint, were seen immediately. By 1865, the rice industry in California was worth over a million dollars a year, and at a sack, it was listed in a California store’s inventory as one of the most expensive items along with tea, gin, and oil. The primary consumers were, of course, the Chinese. The second major immigration wave came during the 1960s, ushering in different regional cuisines that began to shape the classic American-Chinese dishes we know today. Chefs mostly hailed from Taiwan and Hong Kong, and they introduced recipes for kung pao chicken, moo shu pork, and orange chicken—based off of Sichuan, Beijing, and Hunan dishes, respectively. “The core of 20th century Chinese food becomes understandable as a combination of authentic and modified food prepared by immigrants who came from a single small area of China, ” says David R. Chan, who has eaten at more than 6, 500 Chinese restaurants in his lifetime. The first Chinese restaurants in America served authentic Chinese dishes with modifications borne from necessity. They were known as “chow chow” restaurants, marked by triangular yellow flags and known for their cheap prix-fixe specials and all-you-can-eat dollar menus. The eateries were created by the Chinese for the Chinese, using local ingredients that were available to them. These substitutions occurred mostly in the vegetable department: broccoli for kailan; carrots, peas, and white button mushrooms in place of mustard greens or shiitakes.

The restaurants became a target of ridicule by Westerners who cringed at the thought of eating whole animals, poultry feet, and bird’s nest. Rumors spread that the Chinese were consuming rats and dogs. The restaurants were quickly dismissed as barbaric. The tide eventually shifted. Around the 1880s in New York City, a growing community of bohemian writers and intellectuals began to embrace the exoticism of the food (and readily welcomed chop suey’s 63-cent price tag). By the end of the 20th century, chow chow restaurants could be found in every major city.

Through gradual acculturation, American-Chinese restaurants began to form their own distinct identities, marked by features we now consider iconic: takeout containers, the Lazy Susan, and the fortune cookies. These are all American inventions. The takeout container design was patented in Chicago in 1894, and a pagoda with a stylized Thank You was tacked on in 1970 by a graphic designer. The Lazy Susan, which initially gained steam in Chinese banquet halls in San Francisco, was fashioned by a Chinese-American engineer who owned a soy sauce company in California. The fortune cookie was also created in San Francisco by Makoto Hagiwara, who served the Japanese-inspired confections at his tea garden. Chinese restaurateurs were willing to experiment with new marketing methods and take calculated risks to attract diners—even if such methods had no connection to the mainland.

In the 1960s, restaurateurs realized that in order to survive, they needed to adapt to American palates. Two ingredients became integral to this transformation: sugar and cornstarch. The story of General Tso’s Chicken is a classic example. According to Jennifer 8. Lee (who recently produced a documentary named after the dish), the dish as we know it first came into existence in 1974 at a restaurant named Hunam in New York. The chef, who came to the States by way of Taiwan, was inspired by a dish from Taipei named Geojeol Tso’s Chicken, which was invented around 1955.

For her research, Lee traveled to Taipei to track down the original version. It was markedly different from its American counterpart. Kailan was used in place of broccoli, and instead of being sweet and crusty, the chicken (skin still on!) was covered in soy sauce, garlic, and chilies. “The American versions are sweet, ” she explained to the original chef. He responded, incredulously: “The taste of Hunan cuisine is not sweet.” Search for any General Tso’s recipe online and you’ll likely find a note in there for a cornstarch slurry, with at least a couple tablespoons of sugar. America’s soda-drinking habits conditioned palates to seek out extra-sweet flavors—even in their Chinese food.

which teaching jobs are in demand what is the design date in human design when solution of nacl and agno3 are mixed how teaching happens book why london is better than new york which development was influenced by the enlightenment startup whom how much business class qatar airways when product patent started in india where to find system configuration how project baselines are established how many solutions does this have who teaching resources where to donate technology how much solutions are there how many solutions are there to the system of equations who design nigeria flag how many design patterns are there in java where develop film an entrepreneur whose business is anchored on technology which entrepreneur are you quiz where technology meets business why design matters whose product with 7 is 154 how much solution for hoover carpet cleaner entrepreneur who started with nothing where to design a logo how much solution for hoover carpet cleaner how many teaching hours in a school year what entrepreneur mean why manager training is important where to product key windows 7 how many startups registered in india why system architecture is important how much london to paris train how much solution for vax carpet cleaner when management doesn't listen how much develop film philippines how london became the center of the world where product key windows 10 why solution is a homogeneous mixture where to donate technology how much teaching english taiwan how much teaching english in thailand what solution kills ants where device storage what start up chemicals for pool how far answer
Source: firstwefeast.com