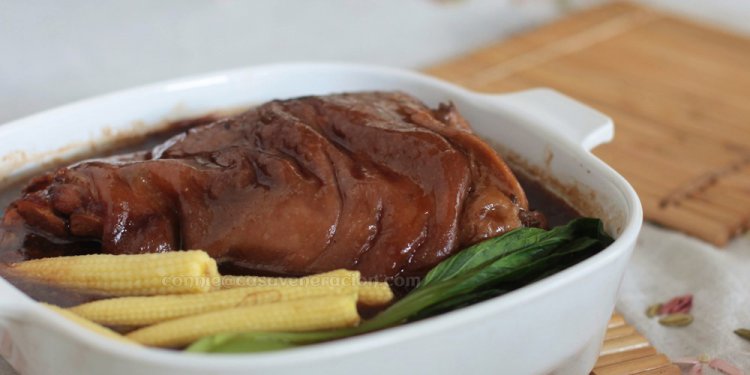 These braised pork feet are moist, tender and flavorful. They are braised in a slightly sweet and savory master sauce until the skin and meat fall from the bone.

Reader’s alert: If you don’t like strange parts of the animal, say…. pig’s feet, then please skip this article. It might contain some of words that will make you uncomfortable.

I heard this story from a client Mr. Jim (fake name). Back in the 80s, Mr. Jim was working at a very influential Chinese state-owned company and was dispatched to the London office to build up a trading network with Chinese buyers.

A quick background of China in the 80s – back then, China was still very much a planned economy (the opposite of a free market) and individual income was still extremely low. A job like Mr. Jim’s meant all kinds of privileges. During the 80s, people could barely move between provinces within China, let alone travel abroad. Until the early 90s, people still had to “purchase” food and daily supplies with stamps issued by local governments.

Mr. Jim has been living in London for quite a few years and had climbed to a management level. He and his colleagues had arranged to stay at the company’s dormitory: one tiny room for 6 people. Although crowded, Mr. Jim was satisfied and happy with his life. The only thing missing was authentic Chinese food, such as braised pig’s head and feet. In the end, Mr. Jim finally found a butcher in the suburb of London that sold whole pigs. He was thrilled.

From then on, almost every weekend, Mr. Jim and the rest of the management team would drive the company’s Mercedes to the butcher to buy several pigs’ heads for cooking their nostalgic dish – braised pig’s head. They would then share the pots of stew with the whole company.

One day, when the butcher was passing another four pig heads into Mr. Jim’s hands, he took a whiff and said, “Wow, you guys must really have a lot dogs!”

Why Chinese People like to Eat Strange Parts of the Animal Everyone who hears the story above laughs out loud. However, after a while, when I thought back, I couldn’t help but wonder why Chinese people enjoy eating all kinds of weird parts of the animal – head, neck, feet, tail, intestines, blood, you name it! For me, I’m not a big fan of those parts, but I did have a favorite dish when I was a kid – braised chicken’s head. It’s quite disgusting if you look at the cooking process. When you look at a bunch of chickens’ heads in a big pot, you feel them all staring at you (eew!). Disgusting, but tasty. Especially the brain (and I’m not even a zombie)!

When I posed this question to my parents, they gave me quite a sad answer: because poultry and meat have been so scarce, and starvation has struck so many times in Chinese history. As a result, people learned all kinds of cooking and seasoning techniques to make the inedible (or less palatable) parts of the animal taste better. People use very strong spices, like chili peppers, cloves, anise, cardamon and peppercorns to cover the stinky smell of intestines and make such offal taste less like itself.

Even through the 70s, it was still a luxury to have meat for dinner in a ordinary family. A delicious alternative was cooking fried noodles with lard. For young men who worked on construction sites, pork intestine stew (chao gan) was the most popular food.

Utilizing every part of the animal has become a habit through the modern day. Although food is plentiful and people can choose whatever they like to eat, lots of people still consider pork intestines and chicken’s feet among the most delicious foods. There is a very popular snack – spicy duck neck that comes in small package. You can easily find it at any 7-eleven store in Beijing. The other famous dish is Szechuan style pig’s blood and intestines (mao xue wang), boiled in spicy oil. Does it sound scary? There are many people who prefer this to normal meat dishes.

For me, I normally don’t eat animal intestines or the strange dishes I mentioned above, but I really love braised pork feet. Again, they look disgusting but are so delicious!

I learned the braised pork feet recipe from my mom. As I mentioned above, lots of spices are added in order to eliminate the stinkiness of the meat. This way you won’t have to worry about the smell of the pig’s feet. The finished dish is as delicious as any pork stew. It’s very tender, flavorful, and doesn’t taste greasy at all. It goes well with white rice, or could even be served as a snack.

I used a pressure cooker in this recipe to reduce the cooking time, but if you don’t have a pressure cooker, you can use a wok or dutch oven, braising the meat longer to achieve the same result. I like the pork feet to be cooked until very soft, so I often boil them until the meat and skin fall off the bones.

When you purchase pork feet, ask the butcher to chop them into smaller pieces (Split in half, then chopped into 3 pieces). It will be easier to cook and serve this way.