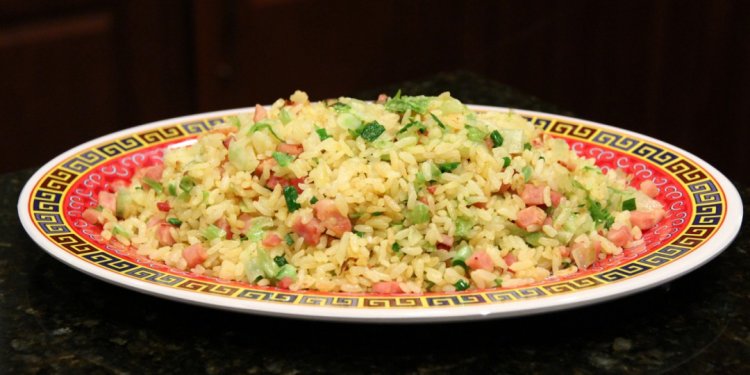 Fried Rice a simple meal perfect for using up leftovers in your fridge!

Fried rice, the staple Chinese take-out entree or the staple filler in Hibachi restaurants. I’ve been eating homemade fried rice since I was a little tyke. It’s a super easy dish to make and I always make it whenever I have leftover rice and veggies. I literally throw everything that’s about to go bad into the dish and call it a meal. Or, like last night, when I was lazy, I decided to make fried rice for dinner since it only takes 10 minutes. Well, another 15 or so if you have rice took cook but that’s just popping it in the rice cooker and hanging out until it’s done.

The way I make fried rice might be different than what everyone else thinks of fried rice. I’ve always had it numerous ways. Whenever my mom made it, she would throw in whatever veggies she had on hand and whatever leftover white rice we had sitting in the fridge. That’s where I got the influence of making fried rice. To me, fried rice is always different. In the sense of ingredients. Sometimes it can have carrots in it, sometimes it will be meatless (like mine was last night), sometimes it’ll have deli meat that’s about to expire. However, the process of making fried rice is always the same and it’s how my mom and I have always cooked it.

I hope you make some yourself so you can enjoy the deliciousness of Chinese take-out in your own home. It’s loads healthier too — no MSG and you can tailor the sodium & oil levels yourself!

Also: if you’re wondering, “metal chopsticks?” — yeah, I know it’s weird & you don’t see that often, but we don’t like wooden chopsticks because they warp after they’ve been washed and used for a handful of times and they’re more unsanitary. And we aren’t going to go buy disposable, individually wrapped wooden chopsticks since that’d be a waste :)