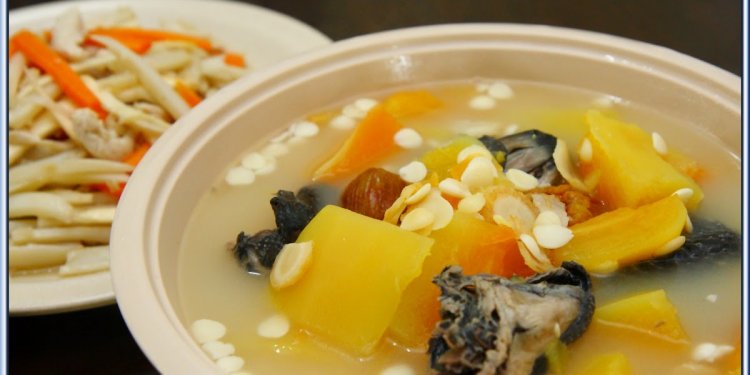 Use this list of Chinese herbs to get to know some common ones used to make Chinese herbal soups.

Want to make a herbal soup but intimidated by the chinese herbs in them? These herbs are added to long simmering soups to extract the natural substances in them that help regulates various bodily functions.

Find out more about these special ingredients in this list of Chinese herbs. I know that pictures of them would help so I try to include as many as I could. This is not a comprehensive list but of those commonly used to make soups for everyday consumption. I do not features herbs or recipes meant as medical concoctions. Those require training and an in-depth knowledge.

花旗参 (hua qi shen) is reputed to be a gentle cooling herb. This ginseng is found growing wild in the Northeast America. But due to over-harvesting, they are now grown commercially for consumption.

Western scientists are now finding interesting compounds and substances that have impact on bodily functions. Traditional Chinese medicine prizes it for its ability to balance the yin and yang forces in the body.

Astragalus is a root with a mild licorice-like taste.

The Chinese angelica root has a very important place in women's health. It is highly valued for the treatment for a host of women's illnesses. It is supposed to strengthen the blood, nourish the female reproductive organs, regulate menstruation and alleviate period pains.

In its dried state, chinese angelica root emits a certain woody aroma that develops into a strong flavour when cooked.

It is usually steamed or simmered with a combination of chicken, mutton, pork and some other herbs, depending on the nature of the ailments to be addressed.

The angelica root requires no preparation before cooking. Dang gui is usually not eaten. Just drink the soup.

The chinese believes that the coix seeds are diuretic, anti-swelling, pus-expelling and cooling. It is therefore most commonly recommended to people suffering from stiff and painful joints, rheumatism, warts and eczema. Read on for more information and recipes with chinese pearl barley.

They are quite sweet and are found as an ingredient in many chinese soups, sweet teas and tonic drinks. It is one of the most popular chinese herbs. Not very expensive either.

It is a natural supplement for improving eyesight especially if poor eyesight is caused by malnutrition, vessel expansion and inflammation. Consuming goji berries may help if you experience eye strain from staring at computer screens and documents for long periods of time.

Goji berries are also beneficial for the liver. A healthy liver manifests in better looking eyes and vision. Traditional chinese medicine taught that any sickness in the liver can be observed from the eyes. For instance, people suffering from hepatitis or jaundice have very yellowish eyes.

In recent years goji juice has been marketed widely as a natural remedy, like some wonder drug. However, it is not a panacea. In fact, people who have diabetes should take it in moderation. Dietary therapy emphasizes balance, moderation and combination in the use of chinese herbs in soups and other foods. This goes the same for goji berries.

The berries can be eaten and they can be quite sweet.

Also known as huai shan (medicinal name), dried chinese yam has a modest appearance ... it looks like chalk. It is also tasteless. Extolled for its wide-ranging health benefits, chinese yam has been recorded as having the ability to enhance vigour, promote muscle growth and repair worn-out tissue, and alleviate bodily weakness after a long-term illness.

This Chinese herb has also been used to counter diabetes, diarrhoea, kidney defects, coughing and dehydration. It can, however, cause frequent urination and perspiration. So be careful not to over-use.

Chinese yam is usually used in conjunction with meats and other chinese herbs to aid digestion, regulate body's sugar level and control inflammation of the uterus. Here are some recipes.

Chinese yam can also be found in its fresh form. It is known as 山药 (shan yao) in mandarin. Prepare as you would potato. This fresh form can and should be eaten.

Codonopsis root has many tonic uses.

The root is usually cooked with meats and other chinese herbs in soups and stews to promote general good health. To use, cut pieces of the root into 3-cm length if they are too long and add to the pot.

who solution definition where design table how startup funding works where to teach english online who science council how much is microsoft roadmap how much system memory do i need who business school why business analyst why system implementation fails where technology is going where is technology made what product is dr pepper when is start up season 2 where's the london bridge who teaching meaning in urdu how much developer to bleach why road map how much science diet to feed puppy where does development occur how solutions are saturated when project is not ready gif whose business is safeguarding how solution is saturated where to launch model rockets entrepreneur where to start how many startup unicorn in india how much teaching should a hlta do how much entrepreneurs earn in india how many management theories are there how many startup in india startup cost when project runway season 20 who management of dehydration where to project x which teaching method is best where to find device name on laptop how to find a co founder for startup in india where to set system property in java what entrepreneur does startup netflix entrepreneur who are successful where is maya from project runway junior where technology comes from how to start the startup
Source: www.homemade-chinese-soups.com