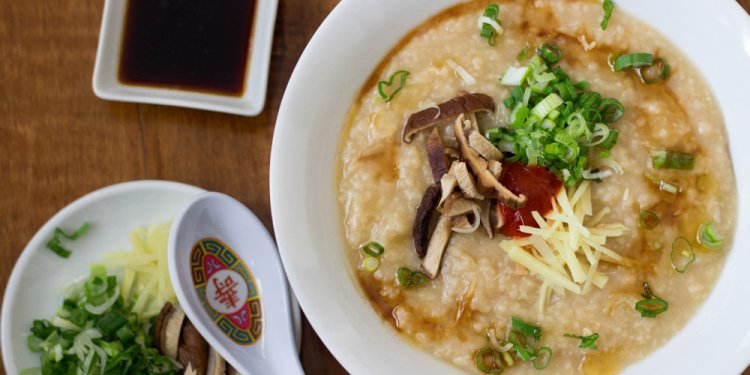 with scissors, cut crosswise about 3 cm long; cut 10 g lengthwise into thin strips about 1 mm thick; rinse and soak in just enough water to cover till soft, about 20 minutes Prepare dried prawns, dried squid and fish as detailed above.

Put kettle on. Wash rice till water runs clear. Add dried prawns, along with soaking liquid, and 750 ml boiling water. Bring to a boil. Stir thoroughly to prevent rice from sticking. Keep rice boiling rapidly for 10 minutes, checking and stirring from time to time to make sure rice doesn't boil over.

Top up with boiling water if necessary, depending on how thick or thin you like your porridge. Continue boiling rapidly till rice is just soft but surface is still smooth without any sign of turning mushy, another 5 minutes or so.

Season porridge with 1 tsp light soya sauce and 天津冬菜. Add fish and stir through gently. Turn off heat once porridge returns to a gentle simmer. Add dried squid, along with soaking liquid, and stir through. Remove pot from stove.

Serve immediately with light soya sauce or light brown taucheo (fermented soya beans) as a dip, with lime juice and/or thinly sliced bird's eye chillies added if you like, to bring out the sweetness of the fish. Fish porridge is best eaten steaming hot.

If your mother-in-law is Teochew and you want to impress her, add a pinch of very finely julienned young ginger next to the spring onions. If you want to knock her off her chair, add a piece of toasted Chinese seaweed (in addition to the young ginger), and make your porridge with white pomfret.