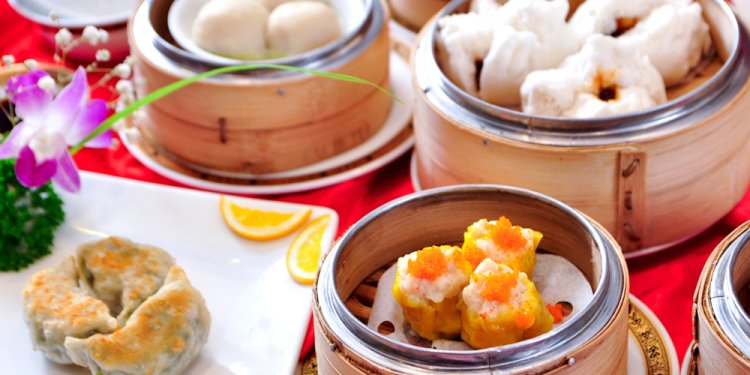 But whose food is this? Under the warming lamps in their compartmentalized pans sit glistening sesame chicken, string beans wok-fried with bits of indiscernible protein, beef with orange flavor. There are French fries, fried plantains, and fried chicken wings. The first time I visited a Chinese steam table buffet in Mexico City, I filled my plate with fried rice, egg rolls, and batons of shellacked spareribs which reminded me of the corner take-out joints in Brooklyn. The flavors, here, were both sweeter and spicier than their "Americanized" Chinese counterparts, geared for the Mexican palate. Other touches reflected the local terrain: a dish of nopales and beef, the cactus paddles standing in for celery; fresh papaya at the end of the buffet line, for dessert. Most customers were drinking agua frescas of jicama and horchata. The fortunes cracked from the cookies at the end of the meal were in Spanish.

A line of condiments sat at the end of the buffet: Sriracha, soy, pickled jalapeños, dried chile in a seething orange oil, and like every eatery in Mexico City regardless of cuisine, the requisite bowl of lime wedges. Is the restaurant Chinese? Chinese-Mexican? Mexicanized-American-Chinese? In other words, what route did the sesame chicken fly to end up as a de rigueur lunch in Mexico's federal district?

The Chinese have a long history in Mexico and today, are a significant presence as a resident ethnic group. Large-scale migration started in the late 19th century, when Mexico was a rapidly expanding country in need of cheap labor. According to immigration records, more than 60, 000 Chinese migrated to work in the fields, mines, and to set railroads. Another catalyst was the United States' Chinese Exclusion Act of 1882, which slammed doors shut and forced traveling hopefuls to divert their paths further south to Mexico. By 1920, the Chinese were the second largest immigrant group in Mexico and had diffused to all corners of the country. Dense communities put down roots in northern border towns like MexiCali, in port cities of Veracruz, and to the south, in Chiapas. Mexico enacted its own exclusionary measures in 1930, launching an anti-Chinese campaign and in 1931, full-on expulsion. In the 1920s, "cafes de chinos" were Mexican equivalents to the American coffee shop, serving a bricolage menu.

Those ejected were officially invited back in the '50s, but there were some Chinese who stayed. Buttressed with links to Chinese wholesalers on the mainland and in the U.S., they established a "transnational commercial orbit, " as Robert Chao Romero describes in his book The Chinese in Mexico, 1882-1940. This intra-ethnic network aided labor contracting and commercial trade across multiple borders. Within their local communities, they opened groceries, stocked Chinese ingredients, and built small restaurants to feed a growing diaspora.

Some entrepreneurial Chinese were already versed in American-style, short-order cooking and in the 1920s, opened "cafes de chinos" that specialized in cafe con leche flanked by pan dulce and quick, cheap meals. These utilitarian restaurants were Mexican equivalents to the American coffee shop, serving a bricolage menu of eggs, pancakes, and coffee; Mexican dishes like enchiladas and tamales; and nominally Chinese dishes, like chop suey and fried rice.

These eateries grew in popularity, offering an affordable, round-the-clock respite for urban laborers and new waves of immigrants. They reached their pinnacle of popularity in the 1950s. The streets surrounding the Zócalo in Mexico City were full of them, marked by bobbing red and gold paper lanterns. It's here that Mexico City's first Chinatown "Barrio Chino" (note, "Chino" in Spanish is often used as a blanket term that refers to anyone of Asian descent, corralling a diverse group of ethnicities) coalesced on a two-block stretch of the Centro Historico, serving Americanized Chinese and Mexican-Chinese mashups.

Luis Chiu's father in the Barrio Chino, 1992. He's standing in front of Shanghai, the family's restaurant that opened in 1947. Photo: Courtesy the Chiu family

Luis Chiu, the young chef of one of DF's Chinese restaurant standouts, Asia Bay, traces his lineage back to these early peregrinations. His great-grandfather was part of a wave that came to Mexico during the Revolution and was privy to the anti-Chinese sentiment generated by extreme revolutionary nationalism. He left. Decades later, his son, Chiu's grandfather, landed in Veracruz, eventually making his way to Mexico City where, in 1947, he opened Shanghai, one of the first restaurants in Barrio Chino. It's still open.

"When he started he couldn't find any Chinese ingredients, so the only thing they could make was chopped suey and all those bad, quick Chinese dishes, " Chiu says. But the restaurant became a cultural hub. "It was the first stop Chinese people would go when they landed in Mexico, " Chiu says. "It used to have a casino, an underground one, where they would play mahjong, with the restaurant upstairs." His father continued in the industry, opening a number of cafes throughout the city that served both Mexican and Chinese dishes — the clientele mostly made up of Chinese immigrants seeking community. But three generations and many restaurants later, Chiu is forging new ground.