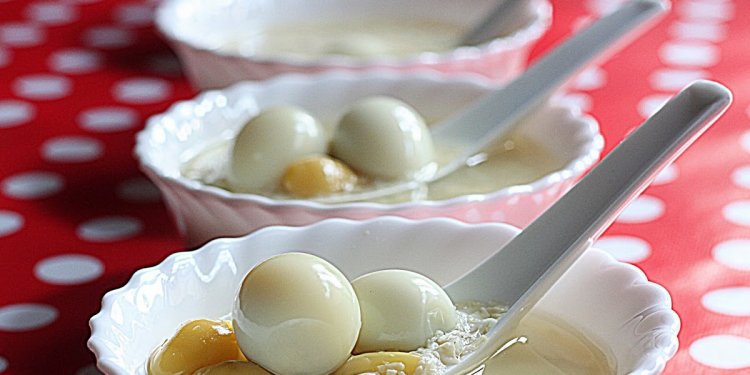 The weakest link in Chinese American dining has always been dessert, or the lack thereof. The Cantonese scene, which defined Chinese dining in the United States for nearly a century and a quarter, was nearly devoid of sweets. The only dessert I remember as a kid was the agar-based dish which we referred to as “almond jello, ” topped with canned fruit cocktail and hardly the highlight of the meal.

Indeed, it wasn’t until the late 1970s that I encountered a different dessert in a Chinese restaurant. Green Jade was one of the first non-Cantonese restaurants to open up in Los Angeles Chinatown, back when anything not Cantonese was referred to as “Mandarin” or “Northern.” Not encumbered by the Cantonese disdain for desserts, Green Jade actually had a short dessert section on its menu. I remembered how fascinated I was with its candied banana and candied apple dishes, dunked in ice water.

While desserts like caramelized bananas and apples were a major improvement, desserts were still an afterthought at American Chinese restaurants for many years to come. Yes, a small number of sweet dim sum items, like egg tarts, tofu with sweet ginger sauce, bak tong gou, and mango pudding became popular. But to this day, Chinese chain restaurants like P. F. Chang’s and Hakkasan feature chocolate goodies or Western desserts shaped like wontons for want of well-known Chinese desserts. And desserts are still dismal at many larger Hong Kong-style seafood restaurants which typically serve a complimentary but often gruesome soupy sweet red bean dessert.

There is no simple answer, but a couple of landmark events should be noted. The first dates back about 15 years with the arrival of boba drinks, also known as bubble tea, on American shores. These tea- and fruit-based drinks infused with chewy tapioca balls became popular in Taiwan and other parts of Asia in the early 1990s, and around 2000 the first boba shops appeared in the San Gabriel Valley outside of Los Angeles. Soon, there were three major boba chains operating in the US: Quickly, Lollicup, and Tapioca Express. Boba parlors became the rage for something sweet after dinner, and as time went on, they began to sell food, mostly Taiwanese snacks such as popcorn chicken, fried tofu, and fish balls. One pioneering eatery, Guppy House, located in the tertiary Asian community of Cerritos, CA, added shaved ice mixed with fruit to its menu, and became the forerunner to today’s Chinese dessert eateries.

The next major event also came out of Taiwan. Six years ago, the Taiwanese chain 85°C Bakery and Café opened its first American branch in the Orange County, CA community of Irvine. While Chinese bakeries had operated in the United States for many decades, 85°C was something radically different. Instead of the traditional Chinese strawberry cakes and Hong Kong baked goods like pineapple buns, 85°C introduced a new style of baking, mixing Chinese, Japanese, and European elements. With a combination of sweet, salty, and savory flavors, and liberal doses of butter in its buns and breads, 85°C was earth-shattering. The first time I drove there, I thought the mob in the parking lot may have been a crowd exiting a movie theater. I soon found there was no theater, and they were waiting up to an hour just to get in the bakery. When 85°C later opened its first San Gabriel Valley store, the opening day wait was over two hours. 85°C has subsequently opened quite a few stores throughout California, so the queue has shortened substantially. Perhaps more importantly, it spawned imitators selling similar baked goods, and opened the door for all sorts of dessert shops to follow.

In the San Gabriel Valley, the Premier Desserts chain is well known for its pandan pancakes and taro balls, while Kung Fu Soy has super-sized and dressed up the sweet tofu originally found on dim sum carts. Ganache’s specialty is lava cake, while Oh My Pan has the best brick toast around. The Taiwan-based Blackball chain just opened its first U.S. outlet highlighted by its grass jelly offerings. And many Hong Kong-style dessert choices abound at the pioneering Phoenix dessert chain, which has been plying the San Gabriel Valley with desserts for almost ten years.

In New York Chinatown, three dessert eateries opened in 2013 on the same block on Bayard Street. Beautiful Memory Desserts features fruit pancakes and fruit soups, just a few doors away from Mango Mango, where you can get glutinous rice balls with ice cream or fruit juice. Another dessert shop, Indessert, opened a few blocks down on East Broadway, though it recently shut down. The big news in this neighborhood is Eggloo, which opened recently on Mulberry Street and has been mobbed by crowds craving its Hong Kong egg waffle ice cream delights.

Things are looking even better dessert-wise at some sit-down Chinese restaurants. Some Hong Kong-style cafes, such as Café Spot in the San Gabriel Valley, have started serving Hong Kong waffles. Dessert choices on Chinese restaurant menus have particularly improved as the array of regional Chinese cuisines has broadened. San Gabriel Valley Chiu Chow-style restaurants 888 Seafood and Seafood Palace now serve a wonderful variety of Chiu Chow-style taro desserts. A decade ago, I first encountered Sichuan-style rice balls with sesame paste at Szechuan Palace in Phoenix. Today, many Sichuan restaurants serve rice balls as well as and other sweet desserts. Mei Long Village in San Gabriel serves glutinous Shanghai-style rice balls along with other Shanghai desserts. And Class 302 is legendary for its Taiwanese shaved snow.