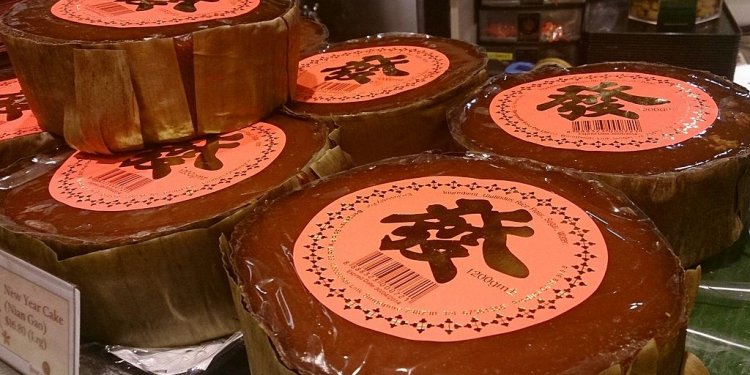 The pronunciation of niangao sounds like 'year high' (年高), which symbolizes a higher income, a higher position, the growth of children, and generally the promise of a better year. niangao was originally used as an offering in ritual ceremonies before it gradually became a Spring Festival food.

How 'Year Cake' is Made

niangao is usually made from glutinous rice flour, wheat starch, salt, water, and sugar. It is delicious when steamed, fried, or even eaten cold. Many people in rural areas still observe this ancient method to make New Year cakes:

The flavors of Niangao can be divided into two major kinds:

In Beijing, New Year cakes are on sale in many snack shops, like Qianmen Snack Street and Jiumen Snack Shop, especially during the Spring Festival.

Guangdong niangao is often like a soft, sticky dough, made from glutinous rice flour, peanut oil, and shelled melon seeds, and wrapped in bamboo leaves. Rice cakes made in this way taste soft and sweet.

Hainan New Year cakes are made before the Spring Festival as gifts to share, with glutinous rice flour, sugar, sesame seeds, red dates and water as the main ingredients. There are some special ways to enjoy Hainan niangao, such as frying, baking, and boiling. In Jiangsu and Zhejiang (the Yangtze Delta area) choices of New Year cake fillings include sweet-scented osmanthus flower sugar, lard oil, and sweet red beans. In Zhejiang, the most common 'year cake' is Niningbo niangao, made from rice which has been crushed in a water mill.

niangao has a legend about its supposed Suzhou origin, around 2, 500 years ago.

In the Spring and Autumn Period (722–481 BC) of ancient China, the whole country was divided into different small kingdoms and people suffered from the chaos of war. At that time, Suzhou was the capital of the Wu Kingdom. Strong walls were built to protect Wu from attacks, and the king held a banquet to celebrate their completion.

All of the people ceased to worry about the war, except for the Prime Minister Wu Zixu (伍子胥). He told his entourages: "War should not be viewed lightly. The strong wall is a good protection indeed, but if the enemy state besieges our kingdom, the wall is also a hard barrier to ourselves. In case things really go badly, remember to dig a hole under the wall."

Many years later, after Wu Zixu passed away, and his words came true. Many people starved to death during the seige. The soldiers did what Wu Zixu told them before and found that the wall under the earth was built with special bricks made from glutinous rice flour. This food saved many people from starvation. These bricks were the supposedly original niangao.

After that, people made niangao every year to commemorate Wu Zixu. As time passed, niangao became what is now known as Chinese New Year cake.

niangao is made from glutinous rice and high levels of sugar. It is high in calories, and may be bad for you if over-consumed. Therefore you should not eat too many New Year cakes, especially if you suffer from obesity, diabetes, or high bloood pressure.