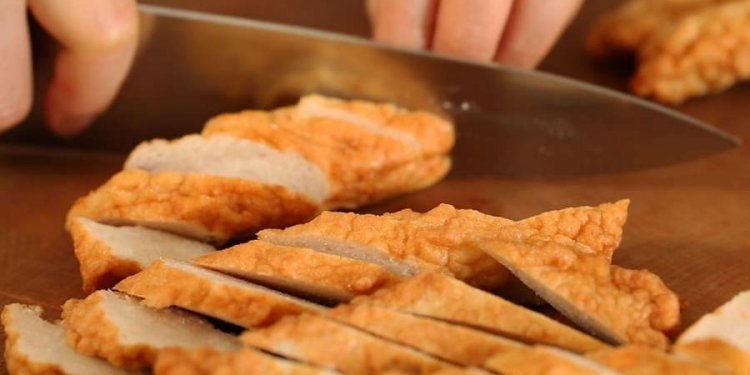 The Asian style fish cake is a healthy snack that is packed with plenty of nutrition and the taste of the sea. It has a spongy texture with a crispy surface. The flavor is appetizing, refreshing and satisfying when paired with sweet sour Thai chili sauce.You can use frozen fish fillets and a food processor to cook it in 30 minutes.

It was quite frustrating every time I tried to cook fish or seafood in Beijing, because it’s so difficult to find fresh ingredients. I really cannot blame the city, though. Beijing is an inland city and is located 150 kilometers (93 miles) from the sea, so it’s understandable that transporting seafood to the city is expensive. Consequently, we do not have a strong culture of eating seafood, which has led to a lack of selection of ingredients on the shelf at an average supermarket. However, I still feel a craving for seafood once in a while.

I had some of the best fish balls and calamari balls in Hong Kong and Macau. The fish balls are made from very fresh fish with minimal seasoning. They have a light, bouncy, and springy consistency with a great taste of the sea. No matter whether the fried ones served as a snack or the boiled ones served in soup, they give you a great sensation beyond the fact that they are super healthy. That’s why I decided to make some fresh fish balls at home in the first place. However, the cooking experiment did not go as smoothly as I expected. In the end, the fish cake recipe was actually the result of a failed experiment to cook fish balls. I failed three times in the kitchen and finally I decided to try something different. In the end, I successfully made some yummy fish cakes from the batter that was intended to create fish balls. I still don’t have the insight to create delicious fish balls. However, I do know the don’ts for cooking fish balls. Here is my list:

3. Only use fish with a very tight texture and decent fat content, for example mackerel.

4. Never use fish that is dry and flaky, such as tilapia, flounder, snapper, the list goes on and on.

5. Only chop the fish with knife or cleaver; do not use a mixer or food processor.

6. You have to throw the fish paste against the cutting board until your arms are sore and your clothes are covered in fish flakes.

By the way, there is a super detailed fish ball recipe from Rasa Malaysia and a geekier recipe from This Hungry Kitchen if you want to challenge it. The sad fact is, where you live does matter a lot when it comes to making fish balls. The good news is, you can use whatever fish you can get to make a tasty and healthy fish cake snack!

I used frozen flounder to make these fish cakes. To speak the truth, flounder is probably my last option when cooking fish, but it’s all I could get that day in the supermarket. Since flounder has a very loose texture, I added extra flour into the batter in order to shape it. I actually tested grilling them in a skillet and boiling them. The boiled ones turned out dry with a texture that is very wrong for a fish ball. (real fish balls don’t require flour, because fresh fish should shape easily without any adhesive ingredient)

However, the flour worked like magic for grilling. The surface of fish cake turned to a nice golden color and tasted super crispy. It had a nice refreshing flavor without tasting fishy. The sweet Thai chili sauce goes great with the fish cake, making this healthy and low calorie snack definitely good enough for a party!

My cooking experiment was not a very successful one this time, but I’m glad that I created something delicious from the original idea. If you ever come across failure in the kitchen in the future, it’s a good idea to take a step back and try to think creatively. Maybe the dish has not failed at all! To make the fish cake without food processor.

To make the fish cake by food processor.