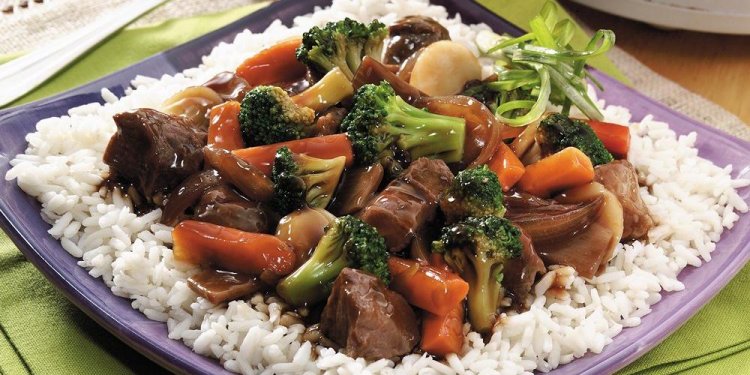 Chop Suey is a stir-fried dish which can include a variety of meat and vegetables in a cornstarch thickened sauce. While allegedly from the Guangdong Province, chop suey is widely believed to have originated in the US during construction of the Transcontinental Railway. Whatever Chop Suey's origin, it's become synonymous with American Chinese food.

One of the factors that influences the evolution of food as it migrates to a new land is the availability of traditional ingredients. When chop suey arrived with early Chinese immigrants in the late 19th century, bokchoy, straw mushrooms and water chestnuts weren't available here. So the immigrants did what any great chef would do and improvised, using readily available ingredients such as cabbage, button mushrooms and celery. In this version I've tried to stay true to the inauthenticity of American Chop Suey by using ingredients that would have been available around that time in the US.

I've chosen Choy Suey as my submission for this month's Dinner and a Movie. Susan of Sticky Gooey Creamy Chewy is hosting this month and she selected Breakfast at Tiffany's as the theme. While I'm sure others will post on the many merits of the film, I decided to tackle its biggest controversy. What does this have to do with Chop Suey you ask?

Produced in 1961 and loosely based off Truman Capote's novella of the same name, Breakfast at Tiffany's was filmed at the infancy of the Civil Rights Movement. Before the March on Washington where Martin Luther King gave his famous "I Have a Dream" speech, and before Asian American actors like Pat Morita and George Takei were cast to play their own kind in leading (though arguably stereotyped) rolls.

It's no surprise then, that in the grand old tradition of Blackface in theater, Mickey Rooney was cast to portray Holly Golightly's yellowfaced neighbor Mr. Yunioshi. Is it offensive by today's standards? Certainly. It reflects the mentality of a period in our history when it was perfectly acceptable to use minorities as the butt of all jokes.

But as someone who wasn't born yet in 1961, I see Mr. Yunioshi as an enduring record of where perceptions have been, a benchmark to judge how far we've come in one generation and that's something to be grateful for. It's not to say that stereotypes don't exist anymore, but it's much harder for these anachronistic notions to thrive unchecked (just ask )

I chose to make this dish because there was a time, not so long ago when all Asians were Orientals* and all Orientals ate Chop Suey. As the quintessential yellowface of the culinary world, Chop Suey seemed like the perfect dish to represent Mickey Rooney's roll in the film.

In case you were wondering the term "orient" originally referred to the region now known as the Middle East.

Chop SueyChop Suey is a stir-fried dish which can include a variety of meat and vegetables in a cornstarch thickened sauce. While allegedly from the Guangdong Province, chop suey is widely believed to have originated in the US during construction of the Transcontinental Railway. Whatever Chop Suey's origin...Marc Matsumoto

Based on your location, units have been adjusted to Metric measuring system.

Dry sherry (or shao hsing if you have it)