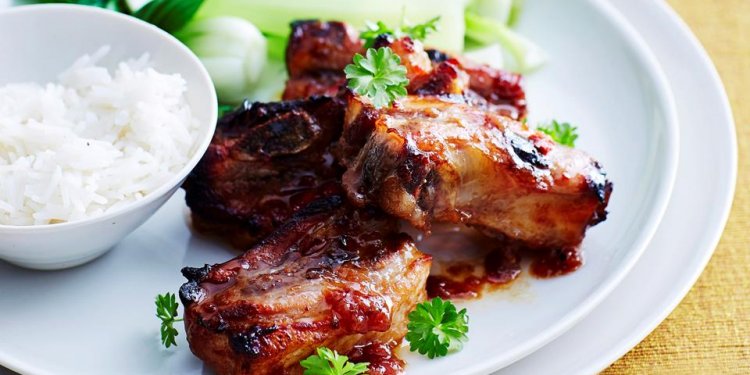 I love the "barbecued" pork and ribs in Chinatown. They have a distinct pork flavor, a glossy sheen that implies the sweet glaze beneath, and a glowing red-pink color that penetrates the surface.

A Dissertation Upon Roast Pig

Everyone has a theory of where barbecue originated. Well here's an explanation that I find irresistible. It was written by Charles Lamb (1775-1834), an English writer whose essays often ran to the fanciful and humorous. His version of the discovery of roast pork was first published in 1822. It is believed to be the source of the common idiom "burn the house to roast the pig", meaning, essentially, overkill. It is probably also the source of the name cracklings for cooked pork skins, and explains why so many barbecue cooks are called Bubba. Clearly Mr. Lamb was a pork lover. Click here to read his tale.

Sun Wah Bar-B-Q Restaurant (5039 N. Broadway St., Chicago, IL 60640, phone 773-769-1254) has been an Uptown Chicago destination since 1987. Owner Eric Cheng learned Chinese barbecue, in Guangdong Province in Southern China, home of Cantonese cuisine. He fled Mao Zedong's Cultural Revolution in China in 1972 by swimming eight hours to Hong Kong where he apprenticed and became a Barbecue Master. He emigrated to New York in 1976 and Chicago in 1986. Here's how he makes barbecue pork (the photos were taken at his previous location): The marinated pork loin strips are skewered and hung in the oven to roast for about 50 minutes. Some ovens use charcoal, but most use gas. The burners go around the bottom of this well-insulated cabinet. There is no smoke.

When done they are dunked in a molasses based sauce similar to Char Siu sauce. Barbecue pork loin sections can be bought in slabs or sliced. Click here for more pictures of Sun Wah. Well, it turns out that Char Siu, even though it sounds like charcoal, is not grilled or smoked. It is roasted in a special oven, usually gas fired. And most of the time it gets its ruddy tone from red food coloring (some chefs use a red bean paste, or beets, but that's not common).

But it still tastes great. You can buy Char Siu sauce in Chinese specialty stores, but it is thick and gooey. It makes a fine glaze, but it doesn't make ribs that taste like Chinese restaurant ribs. That's because you need to marinate the meat first. I've worked on this recipe for a while and I think I've really nailed the technique for making Chinatown Char Siu Ribs at home in the oven or on the grill. Here's how to do this dizzingly delicious favorite.

This marinade is especially good on pork, but I used it on chicken, turkey, and duck with great success. Ribs: 2 slabs of baby back ribs, cut into individual bones

Pork: 4 pounds pork loin cut into strips across the grain, about 1" wide, 2" tall

About the ribs. Many Chinese restaurants use spareribs that are chopped into 3-4" riblets with a cleaver. If you want, your butcher can make you riblets with her band saw. If not, you can do them whole. I like baby backs for this recipe because they are meathier on top of the bone.

About the Chinese ingredients. There are no substitutes for hoisin sauce, five spice powder, or sesame oil. They are responsible for most of what we think of as the flavor of Chinese food in the US. Five spice powder is easy to make at home (click the link above for my recipe), but the others are not easily made. Click on the links for more info on these ingredients. If you have trouble finding them in your grocery store, try Amazon.com.

About the hot sauce. If you have an Asian-style chili sauce you can use it, but any old hot sauce will work fine in this marinade since it provides more heat than flavor. The recipe above produces mild heat. Add more if you love pain.

About the food coloring. Food coloring is necessary for the authentic color. I am told by readers that you can substitute beet root powder for the red food coloring or fermented bean red curd, but I've never tried them. There is very little used in this recipe and most is discarded with the unused marinade. There are natural food colorings made from achiote and its seeds annato, or cochineal (a.k.a. carmine), an insect. If you want to leave it out, the food will still be great, but it won't have the traditional festive color.