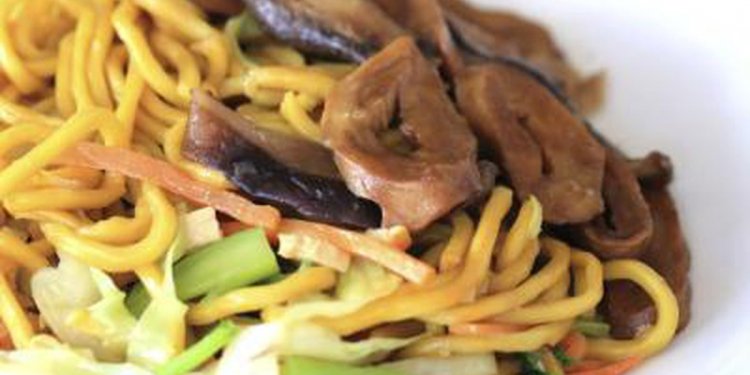 On this page we list some basic Chinese Food Ingredients, which should be present in your Chinese shelf and are used to prepare some of the most common Chinese Food Recipes.

Most can be obtained at your local supermarket, look in the Asian or Ethnic Supplies section.

Fresh Chinese Ingredients
used for Flavor and Seasoning Garlic
Garlic has been used in China for over 5, 000 years. Not only in the kitchen but also in Chinese Traditional Medicine as it is considered to have medicinal properties. You will find that Garlic is used throughout Chinese cooking, one of the most common uses is with stir-fries. Ginger
Ginger is along with garlic the most common Chinese Food ingredient used for flavoring. Ginger is popular with Cantonese dishes as well as the more spicy Szechuan recipes. Besides fresh ginger, you can also find it ground and pickled. Green Onions

Green Onions or Spring Onions are used liberally either cooked to add flavor or raw as garnishings. A staple in most stir-fry dishes.

Chilies
Fresh Chilies can be added chopped, sliced, crushed or whole for that extra zing! There are many kinds of chilies, some are hotter than others. Also can be found dried and they are just as hot. Cilantro or Chinese Parsley
A very popular herb with a strong flavor, also known as Coriander. It is popular in Chinese cooking with sauces, soups, dim sums and as garnish. Chinese Sauces and Condiments Soy Sauce
There is a light soy sauce and a dark soy sauce, make sure you use the kind your recipe calls for. We normally use the dark sauce for cooking and season meats. The light soy sauce can be served on the table for dipping spring rolls or dim sum for example. Oyster Sauce
Oysters and soy sauce are the main ingredients. The brown sauce, although made from oysters, it doesn't have a strong fishy taste, its taste is rather mild and is used for cooking meats and vegetables and very popular in Cantonese dishes. There is also a "vegetarian" version made with mushrooms. Sesame Oil
Sesame Oil is a dark, aromatic and very flavorful ingredient. There are several kinds, the one used for Chinese cooking is usually heavier and darker and it is not used for frying but rather as a marinade, sprinkled at the end just for flavor, or added to dipping sauces. Five Spice Powder
What is in Five Spice Powder? It is made of ground peppercorns, star anise, cloves, fennel and cinnamon and sometimes coriander seeds. It is a mix of flavors, from sweet to hot, fragrant, salty and pungent and used to condiment meats, fish, poultry and vegetables. Chili Sauce
Made from chili peppers, it is used for dipping and stirfrying. Can be served on the table to sprinkle over food as desired. Chili Paste
Made from chili peppers and soybeans, it's a staple in Szechuan and Hunan spicy dishes. Fragrant when cooked, a tiny bit goes a long way. Rice Vinegar or Chinkiang Vinegar
Very popular for its strong smoky flavor. This dark rice vinegar is made of glutinous rice and can be added to soups, dipping sauces and braised dishes.