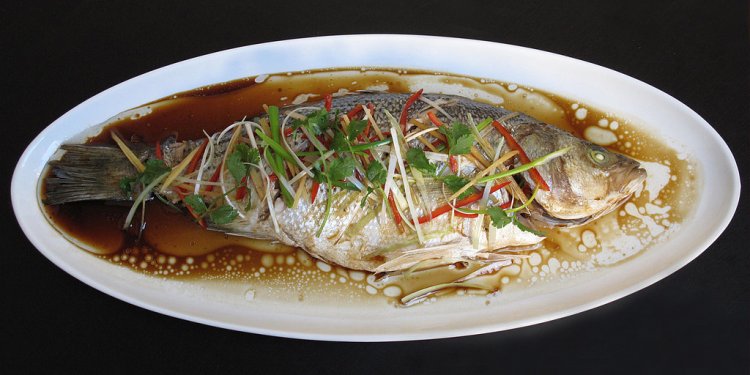 The fish is roasted until moist and tender, with a crispy surface. The accompanying vegetables are cooked in Szechuan hot sauce and savory black bean paste, with pickled peppers, to impart a pungent and spicy flavor. A party for the eyes and the taste buds comes together in a single dish.

This famous dish is from Chongqing, a city in the southwest of China. If the name doesn’t ring a bell, here are a few facts you should know about this city.

Chongqing Style roast fish (重庆烤鱼, chong qing kao yu) was a fad in Beijing that started in 2007 and lasted about 5 years before fading away. Back then, you could easily see signs for roast fish on every busy street, no matter whether for a big restaurant or a small bistro. Hundreds of small stores opened, featuring only roast fish. I was hooked on this fish just like everyone else, and I would go out for it every two weeks or so.

Although it is called Chongqing style, restaurants often serve several types of sauce on the roast fish. Among them, the spicy one is the most popular, so I included this one in the recipe today.

Different from a typical Western style roast (or grilled) fish, the Chinese kind uses various pungent spices and seasonings. The fish is coated with cumin powder and chili pepper, and roast until crispy. After the fish is cooked, the thick sauce is added on top, with tons of veggies cooked in it. In a restaurant, the fish is served in a huge metal tray with a mini stove below to keep it warm. This way, the veggies will continue to be cooked in the sauce until charred and super flavorful.

The pungent seasoning is not to bring out the delicate flavor of the fish, but to add flavor to it. People in the inland cities of China rarely eat fish from the sea and love freshwater fish such as carp, snakehead, and catfish. These freshwater fish typically aren’t as delicious as sea fish, and sometimes have an unpleasant muddy flavor. As a result, cooking habits in inland cities have evolved to use heavy spices to season river fish effectively.

When it comes to home cooking, it is fine to go either way. I personally prefer sea fish because they have fewer tiny bones and generally higher quality meat. Another top choice for me would be catfish. It has very tender meat and works great in this dish.

It’s a pity that the roast fish fad didn’t last forever. A lot of smaller roast fish restaurants closed down after 2012 and people are not as keen to eat roast fish anymore. For me, a good spicy roast fish is still one of my favorite meals, even today. In order to replicate the flavor so I can eat this fish whenever I want, I did some research on the dish and developed a way to cook it authentically. The recipe might look ridiculously long, but the process is actually quite simple and easy to follow.

You only need to: