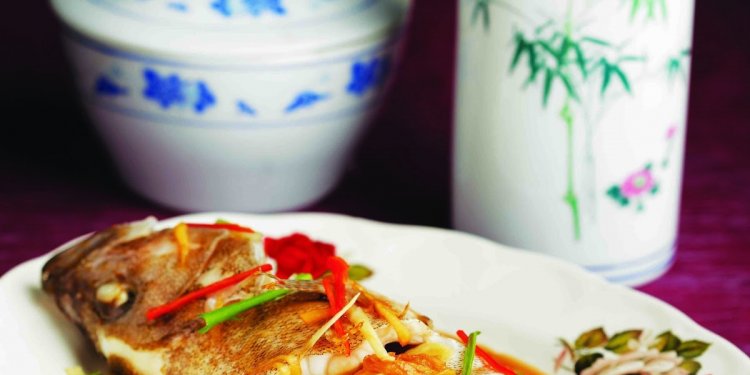 This is a simple way to prepare whole fish, yet one that few western cooks have mastered. In Vietnamese culture, a properly steamed fish is a benchmark for chefs, and those who can't do it right are considered bad cooks. A perfectly steamed fish has flesh that is just cooked at the bone, never dry. Typically, a whole fish is not served with the liquid in which it was steamed, which is too fishy tasting, and any sauce is added at the end, after the fish has been cooked. In this classic Chinese preparation, the fish is topped with spring onions, coriander and ginger, then doused with hot oil, which releases the flavour of the aromatics into the flesh of the fish.

How to prepare a whole fish

Most markets sell fish that have already been scaled and gutted. If a fish has not been cleaned, you can ask the fishmonger to clean it for you. I also trim off the fins, because the fish is easier to serve without them. With a pair of scissors, cut off the fins from both sides of the fish, from the belly, and then the dorsal fins (the ones running along the back). Finally, trim the tail by cutting it into a V shape, and score the fish.

Rinse the fish in cold water and pat dry with kitchen towel. Season the fish inside and out with salt and pepper. Place the fish on a heatproof plate that is large enough to accommodate it and fits inside your steamer, bending the fish slightly if it is too long. Stuff half the ginger inside the cavity of the fish, and spread the remaining ginger on top of the fish.

Pour water into a wok or stockpot and set a steamer in the wok or on the rim of the stockpot. Make sure the water does not touch the botton of the steamer. Bring the water to the boil over a high heat.

Place the plate holding the fish in the steamer, cover and steam for about eight minutes, until the fish flakes easily when tested with the tip of a knife.

While the fish is steaming, in a small bowl, stir together the soy sauce, rice wine and one tablespoon of water. Set aside.

When the fish is ready, carefully remove the plate from the steamer and pour off any accumulated liquid. Lay the spring onion and coriander along the top of the fish. In a small frying pan, heat the oil over a high heat until it is hot but not smoking. Remove the oil from the heat and pour it directly over the spring onion and coriander to "cook" them. Drizzle the soy mixture over the fish and serve immediately.