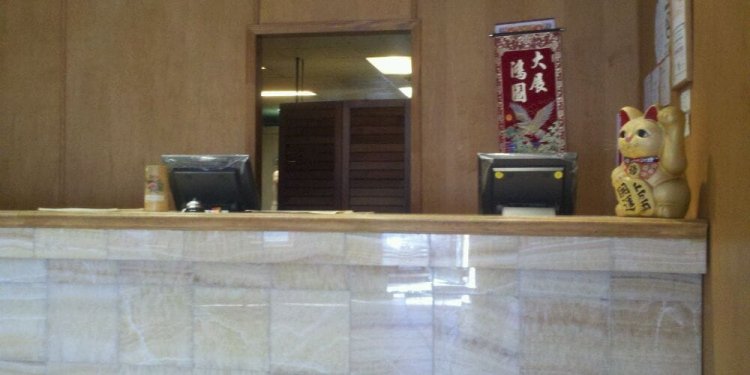 Although no one had been expecting it, the installation at the Waldorf Astoria of the sleek, new Asian restaurant named La Chine into the space that had long been the casual eatery Oscar's Brasserie seems a logical step for the grand hotel's new owners. The Beijing-based Anbang Insurance Group of China paid a record $1.95 billion for the hotel. Word is they poured another $12 million into La Chine, and it shows in every detail of this beautiful dining room, and as much effort seems to have gone into the food, for they are cooking up what is now the most exciting Chinese menu in NYC.
This is not a place to go for General Tso's chicken, moo shoo pork, or egg rolls, and there is almost nothing on the menu at La Chine that you'd easily find elsewhere in NYC unless you ferret the dish out somewhere in Chinatown, where décor and service is always an iffy proposition.
The La Chine design swirls around the motif cherry blossoms and geometric patterns, all done in black, satin bronze, deep blue and gold accents, with a white travertine floor beneath a stunning gold dome and three-tiered chandelier.
It is an extensive menu, set up by Chef Kong Khai Meng from Singapore, in categories of raw seafood, appetizers, barbecue, seafood, beef, chicken and lamb, sides, rice and noodles, then desserts. From the first category we enjoyed lustrous yellowtail with a Szechwan pepper oil just hot enough to enhance the delicacy of the fish without overwhelming it ($22). Carefully cut big eye tuna tartare with caviar, pickled vegetables and soy vinegar ($22) was a triumph of mild, saline, sour, and briny flavors, beautifully presented.
Of the appetizers chilled Szechuan chicken with crunchy peanuts ($16) was a nice surprise, though bone-in pork ribs with a kumquat glaze ($18) was surprisingly bland. Best of all was beef tongue with lotus root and celery ($15), which stood out not just for its rare appearance on a menu but also for its lovely presentation.
You may order either a half ($45) or whole ($70) roast duck with crêpes, leeks, cucumber, and cantaloupe, which also comes with minced duck in lettuce wraps, is very good. Wok-seared lobster took on Guangdong sweet-salty flavors from black bean and wild fern ($45), and the wok also worked wonders for lamb loin Shanxi-style, with cumin and shallots ($38). Wholly different from the chilled chicken dish above, Szechuan chicken with cashews had simple goodness to recommend it, a dish you could go on eating forever.
Braised tofu Guangdong style, itself bland, was ennobled with roasted pork, pickled olive leaves and mustard greens to excellent effect, while buckwheat noodles from Anhut came with barbecued pork and shrimp. Remarkably, while the menu prices are not particularly high for this caliber of food and style, it does seem odd that rice is not served as a matter of course, although it might be argued that in classic Chinese meals, rice is served at the very end of the meal as a mere mild balm to the palate. At La Chine that will cost you $5, whereas side dishes of fried jasmine rice with crabmeat and fish roe runs $19 as a separate dish.
Desserts are rarely the forte of Chinese restaurants but La Chine's coconut tapioca soup with dragon fruit, mango and horned melon ($14) and a dark chocolate and Szechuan pepper cake with molten sesame ganache and ginger ice cream ($15) are not to be missed, though pricey.
La Chine has an extensive list of both Japanese sakes and Chinese spirits in addition to one of the best wine lists for a Chinese restaurant in NYC, overseen by sommelier Christophe Orlarei.
. Specialty cocktails range from $16-$18. There are also nine teas offered.
I noted that the service, from manager Markus Tschushnig and the hostess station to captain and waiters, could not have been more courteous or efficient, but, this being a union shop, at the magic moment of 9:30 PM just about everyone disappeared from the dining room floor, leaving guests to flag down whatever staff member might pass by. This needs fixing fast.
What good is it being a rich Chinese insurance company if you can't showcase fine Chinese cuisine, so I commend Anbang for placing La Chine within a storied hotel whose reputation for excellence that can bring attention to a Chinese restaurant as superlative as this beauty is.