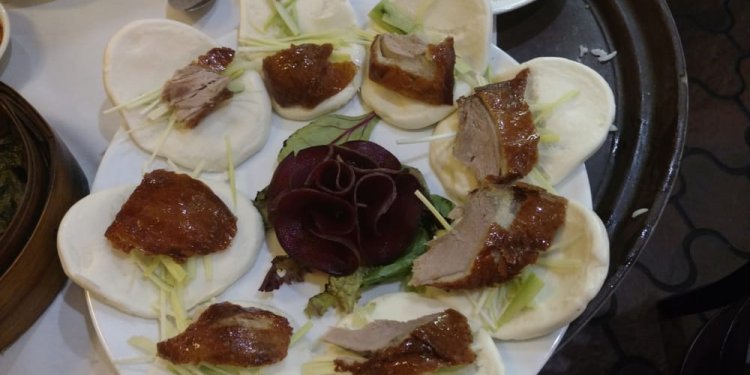 There are a lot of reasons to love Ala Shanghai. The authentic Shanghainese restaurant in Latham not only serves traditional regional foods, they also have a changing seasonal menu. Their upcoming spring/summer menu is currently in development and promises to include some modern takes on classic dishes that are popular in China today.

This makes me giddy.

For the neophyte who may not be quite ready to step up to cold jellyfish salad or sea cucumber with triple delights, the Ala Shanghai menu also has a dim sum section. However, the dim sum most of us know and love is Cantonese. Shanghainese food stems from a different culinary tradition, which makes the dim sum at Ala Shanghai a familiar experience with some exciting surprises.

Here are a few notable items from Ala Shanghai's dim sum menu that you would expect to find where the Yangtze meets the East China Sea, not where the Hudson meets the Mohawk.

Sticky rice wrapped in a lotus leaf is a traditional dim sum item that can be found on Cantonese menus and rolling push carts. One of those pouches could be a meal in itself, filled with meat, chopped vegetables and fat. This heavy, if delicious, dim sum staple is not the same sticky rice that fills the shu mai at Ala Shanghai.

No, this is a fine-textured rice that is deeply flavored with finely chopped ham, dried shrimp, and mushroom. To say it brings the funk is an understatement. Dried shrimp are pungent, and the little bits of Chinese ham bring a sweet and salty balance to the dumpling. The mushroom ups the umami content, filling your mouth with a satisfying sense of deliciousness. And the shu mai is served with a spicy soy sauce.

Ala Shanghai takes their food very seriously and makes sure each dish is presented with its proper accompaniments - like the much-ballyhooed steamed pork soup dumplings (aka xiao long bao, aka XLB, aka Albany Jane snacks), which are served with black vinegar infused with a fine julienne of fresh ginger.

While Xiao Long Bao are from Shanghai, there are other Chinese restaurants in the area that offer them, and I'm not interested in starting a fight as to who makes them best. It may come down to personal preference as to whether you prefer a better broth or a thinner wrapper.

That same black vinegar with the fresh ginger for the XLB is also paired with the Shanghai classic shengjian mantou. Though that is not how they are listed on the menu - you will have to order the "pan fried tiny pork buns."

Be forewarned, for these are not a variation of the ever-popular Cantonese barbecue pork bun. Rather, they are more similar to the XLB, except in bun form. These buns have a steamed top and a fried and browned bottom, which give them a great toasty flavor. Inside is a minced pork meatball that's made juicy with broth. But unlike the soup dumplings these are not waiting to burst open with scalding hot broth. And they are not that tiny. A plate of six of them is the size of your head.

Which shouldn't stop you from getting the crispy turnip pastry, although I understand that turnips can be pretty polarizing. Inside this flaky and rich pastry is nestled a stash of shredded turnips with a little green onion for color. It sounds like it might be healthful, you know, since it has a vegetable in the name of the dish. But it's much more pastry than turnip.

These are more about texture and comfort than flavor. In some ways it reminds me of a potato knish. A starchy root vegetable wrapped up in dough. Except in this case the shredded turnip makes the filling a bit more assertively vegetal, and the golden fried sesame seeds on the bottom add a crunch to what would otherwise be just solid enough to hold together.
____

Before you know it, you've had yourself an entire dim sum experience made entirely of Shanghai specialties. And hands down, it's the best dim sum I've had in the region.

I still haven't found anyplace for good har gow (aka steamed shrimp dumpling), but with interesting and delicious alternatives like these at Ala Shanghai, I don't mind so much.

An order of six sticky rice shu mai costs $5.
An order of six pork soup dumplings will set you back $5.
The pan fried tiny pork buns are $6 and come six to an order.
The crispy turnip pasty has two pieces, but can be halved to feed four, at $5 per plate.

Good to know: Ala Shanghai also recently got its wine and beer license. So if you've been longing for something other than tea to wash down your lion's head meatballs or tong-po pork, you are in luck.

Ever wish you had a smart, savvy friend with the inside line on what's happening around the Capital Region? You know, the kind of stuff that makes your life just a little bit better? Yeah, we do, too. That's why we created All Over Albany. Find out more.

Recently on All Over Albany

It's Columbus Day, and in what somehow ended up being a tradition, that means a map quiz here on AOA. This year's map quiz is...

The Serve Albany initiative has another one of its "Ignite" events highlight volunteer opportunities coming up November 2 at the Albany Elks Lodge. The event...

Robert Lee - who's been the radio voice of Siena men's basketball for 14 seasons (and of the women's team games for two season before...

Lined up for the Times Union Center November 10: T.I. and Gucci Mane. Tickets went on sale this past Saturday - they're $45 and up.