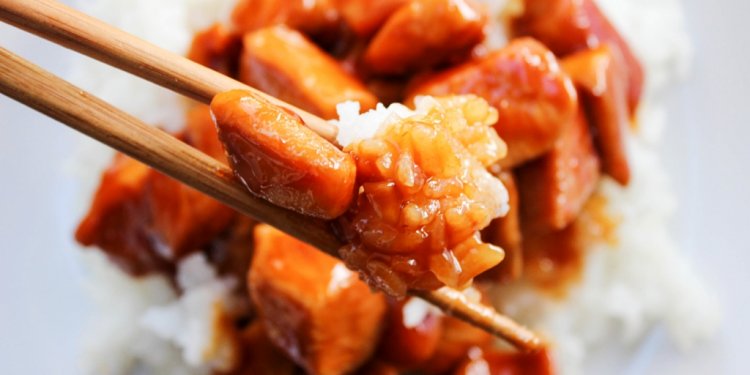 
This dish is about as Chinese as I am, but, fairly or not, mall food court mavens, have been sold on the idea that Bourbon Chicken comes from the heart of China. While the technique used to prepare the dish is Chinese, bourbon is not an ingredient you'll find in Chinese homes, where two types of alcohol are used. One, used for drinking, is a white distilled liquor, called Baijiu. The other, used for mostly for cooking, is an amber fermented rice wine called, Shao Xing Hua Diao. It really is a stretch to call this Bourbon chicken, because, unlike its Cajun counterpart, it contains no bourbon. I, too, have heard the tale of its creation by a Chinese cook who worked in a restaurant on Bourbon Street, but for as much as I'd like to add credence to the tale, there is not a shred of evidence to support that claim. This is a dish that has no history prior to its mysterious appearance in the food courts of America. As it happens, the dish is a wonderful meld of sweet and spicy elements that come together quickly. It is a perfect meal to serve on a hot summer night when you want to limit the time and heat you generate in the kitchen. On the off chance that you do not already this recipe in your roster, I wanted to include it here. It's fast easy and inexpensive and PDG for something that is so simple to make. Here's how it is made. Directions:
1) Heat oil in a large wok or skillet over medium-high heat.
2) Add chicken and cook till lightly browned, about 5 minutes. Remove from pan and set aside.
3) Combine garlic, ginger, red pepper flakes, apple juice, cider vinegar, water, soy sauce, brown sugar, and ketchup in a medium bowl and whisk to combine. Add sauce to pan and bring to a boil. Reduce heat and simmer until sauce just begins to thicken, about 10 minutes. Add chicken and toss to coat with sauce. Simmer for 10 to 15 minutes, or until chicken is done. If a thicker sauce is desired, add optional cornstarch slurry and cook until thickened.Serve over rice. Yield: 4 servings.