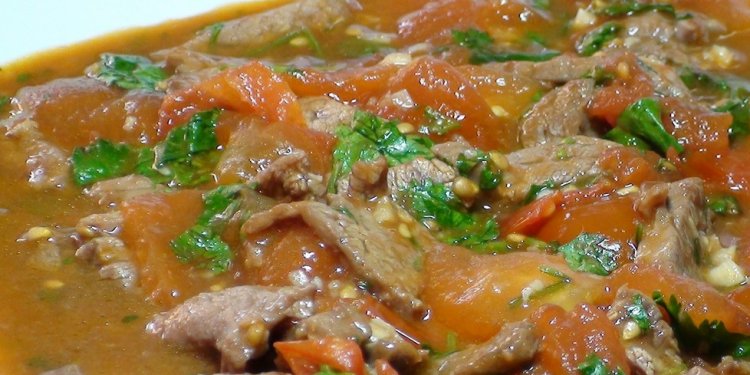 Three simple ingredients that together have the most profound of meanings for me.

I still can picture my Mom in the kitchen of our family house in San Francisco, draining the pot of noodles, tossing them with soy sauce and toasted sesame oil, then splitting them between two frying pans to crisp. With my fingers, I would pick a few hot, crunchy strands out of the pan. As I happily chomped, she would shoo me away with a glint in her eyes, knowing full well I just couldn’t resist.

When the noodles were ready, my petite Mom would toss the hefty mound in a big wok with the flank steak, stewed tomatoes, fresh tomatoes, celery, onions, green pepper, and coins of ginger. When it was ready, my father, two brothers, and I would eagerly line up at the stove to heap some onto our plates.

The taste is at once sweet, savory, and lively, with crisp vegetables and noodles, and unctuous, jammy tomatoes. We always had seconds. We never, ever tired of eating it.

When my Mom suffered a stroke four years ago, and went through rehabilitation to relearn how to speak and to use her right hand again, my husband used to try to keep her fighting spirit up by telling her, “You have to get better so you can cook me your tomato beef chow mein. You know, I’ve never had it yet.” A few years later when her health started to decline severely, my husband would continue to say that to her, even if we all knew in our hearts she probably would never make that dish or any other again. Even so, there were times when he said it that I saw that familiar twinkle in her eyes again.

My husband never got to try my Mom’s true version, made lovingly with her own hands. Sadly, she passed away last year.

As what would have been my Mom’s 88th birthday approaches this week, I vowed to make tomato beef chow mein in honor of her. Fortunately, I had the foresight to have her write down the recipe a decade ago. Unfortunately, I didn’t have the prescience to have her jot down more of them.

I cut the celery on the diagonal, just as I had watched her do so many times. I sliced the flank steak against the grain, just as she always had. Maybe it was the fact that I was mimicking her movements, but I felt as if she was there with me, instructing me, and keeping a watchful eye to make sure I did it as it should be done.

As I tossed the noodles, tomatoes and beef in the fiery wok, it all looked so familiar and felt so right. I scooped a tangle of noodles onto a plate for my husband, who had waited years to taste this dish that he had heard so much about.

He put a forkful into his mouth, and chewed as he let out a most contented “Mmmmm.” “This is GOOD!” he finally said, reaching for another forkful.

I can’t say if my Mom would have thought it tasted exactly like what she used to make. But I’m pretty proud of this rendition. I even threw in a few heirloom tomatoes, something my Mom never would have considered. Still, I think she would have approved.

This was my first time making my Mom’s tomato beef chow mein. I know it won’t be my last. From now on, it’ll once again be a staple in my life. Because, Mom, this one’s by you, and is you. Now. Always. With every blissful bite. 1 teaspoon ground ginger or a few slices of fresh ginger

To make noodles: Cook noodles in a pot of boiling water for about 1 minute. Drain noodles, rinse under cold running water, drain again. Put noodles in a bowl, and stir in 2 tablespoons sesame oil, and 2 tablespoons dark soy sauce.

Heat a small amount of oil in two 12-inch non-stick frying pans. Divide noodles evenly between the two pans. Cook on medium meat until noodles are crispy and light-brown in color. Stir frequently to prevent burning. Set noodles aside and keep warm.

Add a little bit of oil to a large wok or non-stick frying pan, and brown the beef over high heat. Transfer beef to a bowl, and set aside.

— Recipe by my late-Mom, May Jung

More: My Mom’s Prawns with Pork and Black Bean Sauce