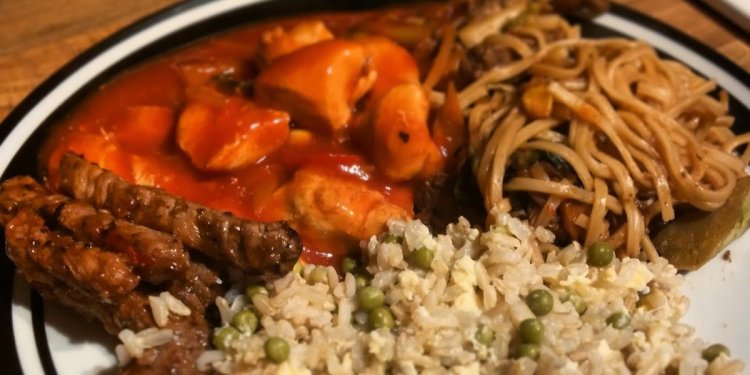 For the Australians reading this, Mongolian Beef is similar to what we know as Szechuan Style Beef and Peking Beef. Thin slices of beef that is shallow fried so it’s super crispy then tossed in a sticky sauce.

Did you notice that I made it in a skillet instead of a wok? To tell you the truth, normally I make it in a wok but I wanted to try it in a skillet too so I could provide directions for that.

It’s easier made in a wok because you can shallow fry the beef in the wok. But if you don’t have a wok, I recommend frying the beef in a small saucepan instead because the beef is cooked with only 1/4 cup of oil. If you use a skillet, then the oil spreads too thinly and you won’t get the same crispiness. After the beef is cooked, finish the rest of the recipe in a skillet. Easy!

In the crispy / sticky stakes, I have to say that this is right up there with Buffalo Wings. That is to say, if someone put a plate of this and a plate of Buffalo Wings in front of me, I am not entirely sure which one I would go for.

PS I got side tracked and forgot to mention that I tried a few recipes I found on a mission to get the closest match to the Mongolian Beef I had at a Chinese restaurant in LA, not PF Chang’s which I didn’t enjoy very much. A few were close, but didn’t nail it. This recipe is from a blog called Woks of Life which is run by a Chinese family who used to run a Chinese restaurant in America. It’s my “go to” source for American Chinese recipes. Every single recipe I have tried has been an absolute ripper. Honestly! This Mongolian Beef is super crispy and coated in a sticky salty / sweet sauce - but not TOO sweet! It's absolutely divine and everyone I've made this for has raved about it. Don't be daunted by the ingredients list - there are a number of repeat ingredients! I jsut like to separate them into groups for ease of following the recipe. 1. You can use any beef suitable for grilling in this recipe. Slice the beef against the grain. When you look at the beef, you will notice that the fibres are mostly going in one direction. Place the beef in front of you so the fibres are going left to right. Then cut through the fibres i.e. cut perpendicular to the direction of the fibres. Cutting it this way makes the beef more tender!

2. If you don't have a wok, do this part in a small saucepan. It won't work in a skillet because the surface area is too large so the oil spreads too thinly. After cooking the beef, transfer 2 tbsp of oil from the saucepan into a skillet to cook the sauce and beef.

For the purpose of sharing this recipe on my blog, I made it in a frypan (to make sure it worked cooking the beef in a saucepan). But usually I make this in my wok!

3. This recipe is slightly adapted from The Woks of Life. This blog is my "go to" trusted source for American Chinese recipes. It is run by a Chinese American family who used to own a restaurant - doesn't get anymore reliable than that!!