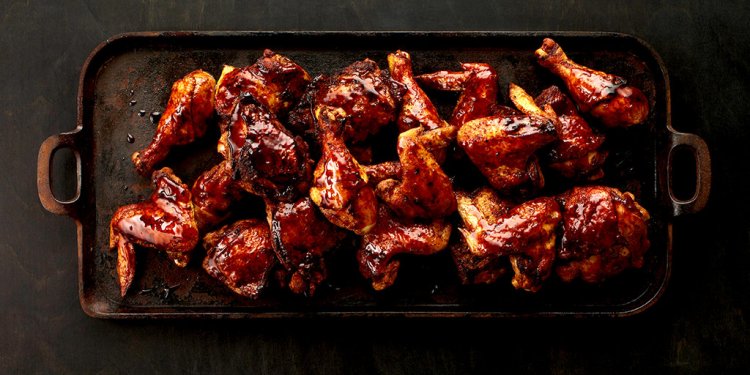 This is my contribution to this month’s #LetsLunch, a monthly virtual potluck on Twitter. This month’s theme is “munchies, ” to toast the release of The Marijuana Chronicles, an anthology featuring a story by Cheryl Tan, one of the founders of #LetsLunch. Here’s a recipe that will hit the spot when you’ve got the munchies– vibrantly flavored with smoky spice, heat, umami and a touch of sweetness.

I am a huge fan of Sam Sifton, of The New York Times, and love how he brings a lively story with every recipe he presents. So I was excited when I saw his recent recipe for Trinidadian Chinese Chicken (“East Meets West Indies”). His depiction of Trinidad is reminiscent of VS Naipaul‘s writing:

“The dish pays faint, mongrelized homage to the Chinese indentured servants who came to Trinidad in the 19th century to cut cane and harvest cacao when the British abolished African slavery but still needed chattel to do their work. The Chinese cooked their own food when they weren’t slaving. All Trinidad — not just Caribs and Africans but also, as in Derek Walcott’s description of the population, “the chained Cromwellian convict and the Sephardic Jew, the Chinese grocer and the Lebanese merchant selling cloth samples on his bicycle” — savored the result. Each group eventually made the cooking its collective own.”

My husband, whose grandfather came from Canton not as an indentured servant but who was, indeed, a Chinese grocer, was excited to see Trinidadian Chinese food, a lesser known cuisine in the US, featured in the NY Times. But he steupsed— a Trini expression for sucking the teeth to express disdain– at the sauce Sifton made for the chicken:

“The addition of a Scotch-bonnet sauce (choose your own, but make sure it is fruity in its fire, with a rich aftertaste) to the funky salinity of a commercial Chinese oyster sauce is revelatory, a culinary mash-up of the very first order. Slathered on the crisp chicken, it becomes visible poetry, a joyous product of survival under hard odds.”

Still, I had to try. I don’t actually remember eating this chicken with my in-laws, despite their being the-real-deal Chinese Trinidadians. The result? PHENOMENAL. Even my previously skeptical husband devoured it. He said the chicken was like what his mother used to make. And he admitted that the sauce, while not authentic, was surprisingly tasty.

1. In a large, nonreactive bowl, toss the chicken with five-spice powder, then with the juice of 2 of the limes, the soy sauce and the ginger. Cover and marinate in the refrigerator for at least 30 minutes and up to 6 hours.
2. Heat oils in a large skillet over medium-high heat. There should be at least 1/4 inch of oil in the pan. When the oil is hot, remove chicken from marinade, allowing excess marinade to drip back into the bowl, and fry, in batches if necessary to not crowd the pan, turning the pieces frequently, until well browned and cooked through, 15 to 20 minutes.
3. Meanwhile, make the dipping sauce. Combine oyster sauce, a tablespoon of the Scotch-bonnet-pepper sauce and the juice of the remaining lime and stir to combine. Adjust seasonings with more hot sauce, lime juice and freshly ground black pepper to taste.
4. Garnish with scallions and serve with white or fried rice, with a drizzle of the sauce over each piece of chicken and the remaining sauce on the side.