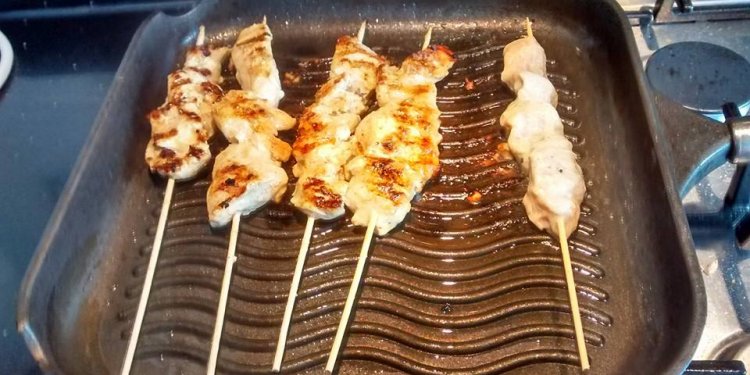 It’s been more than 20 years since I moved from a suburb on the east side of Detroit to San Francisco, and there are a few things I miss about my childhood home. When I say “a few” I mean three: my family, warm summer nights and almond boneless chicken.

If you don’t live in Michigan, you’ve probably never heard of the dish we call ABC — at least not the version served in nearly every Chinese restaurant from Detroit to Petoskey. The dish consists of a battered and deep fried chicken breast cut into thick slices, laid on a bed of iceberg lettuce and topped with mild brown gravy, toasted almonds and a sprinkling of green onions.

My first apartment in San Francisco was a 10-minute walk to Chinatown, but, to my great disappointment, my beloved ABC was nowhere to be found in the neighborhood’s Chinese restaurants and take-out joints.

“Do you have almond boneless chicken?” I asked countless restaurant servers.

But when the dish arrived, it was always stir-fried instead of deep-fried. And where was the iceberg lettuce?

After years of disappointment, I finally came to accept that ABC was “a Michigan thing.”

But how did it get there? And why don’t we have it in California?

I began searching for clues online and came across a 2010 article on the Detroit Free Press website. They’d asked readers to name the foods that define Detroit, and almond boneless chicken was the dish that came up over and over again.

Marshall Chin, owner of a Chinese fusion restaurant in the Detroit suburbs, theorized that ABC was one of the dishes that originated in the old chop suey houses in big cities where Chinese immigrants settled, including San Francisco.

Another Detroit-area restaurant owner, Raymond Wong, took Chin’s idea a step further. “I know it started in the San Francisco area, but in Detroit it became so popular that all Chinese restaurants had it, ” he told the Free Press.

Could it really be true that ABC started out in San Francisco? I had my doubts, so I reached out to Andrew Coe, author of the book “.”

Coe had never heard of ABC, or its alias War Su Gai, but my search for its history piqued his interest.

“Although their origins are in China, specifically around Toishan in Guangdong province, dishes like chop suey and chow mein developed specific regional variations as they spread through the U.S., ” he told me. “There’s a Minneapolis-style chow mein, for example, and a Rhode Island specialty called a chow mein sandwich. I have a feeling the same is true for almond chicken.”

I sent Coe a link to an ABC recipe published on a home cooks’ website, and he did some further digging. He discovered a similar recipe in one of the first Chinese cookbooks published in the United States, “The Chinese Cook Book” by Shiu Wong Chan, released in 1917. The dish was called Hung Yuen Guy Ding, and it was made from boneless chicken, almonds, water chestnuts, onions, mushrooms, celery, oil and stock — the same ingredients in ABC. The secret to the ABC batter is a 50-50 mixture of flour and cornstarch. Credit: Tina Caputo

“It’s a typically goopy dish that was a specialty of the early Chinese-American restaurants, ” he said. “I think that’s the root of your dish, but some creative Midwestern cooks have taken that inspiration and totally transformed and Americanized it — deep-frying, iceberg lettuce, gravy.”

Similar adaptations happened in New England with chop suey, he said, which morphed into “American chop suey, ” made with elbow macaroni mixed with ground beef and tomato sauce.

Now we were getting somewhere. Did Coe think ABC’s predecessor could have started out in San Francisco and then migrated to Michigan, where it was Midwesternized?

“New York was actually much more an epicenter of Chinese-American food influences than San Francisco, ” he said. “During the 19th century, Californians were much more anti-Chinese — violently so — than New Yorkers and refused to eat Chinese food. The American taste for Chinese food was actually first picked up in New York’s Chinatown and then spread all over the country, including to San Francisco.”

So now I had a good idea of where the dish originated, and how it ended up in Michigan. But I still wanted to know why ABC didn’t migrate beyond the state borders.

Further web surfing led me to a blog post about the an ongoing project at the Smithsonian National Museum of American History in Washington D.C., which aims to tell the stories of Chinese people in America through food and restaurants. The collection includes thousands of menus from Chinese restaurants from across the country, spanning four decades. If anyone knew about the regional span of ABC, I figured, it had to be the folks behind the Sweet and Sour project.

“Although we have made an exhaustive search for regional dishes such as the one you are pursuing, ” curator Cedric Yeh told me, “[ABC] hasn’t been one that we have run across. But all is not lost.”

Yeh put me in touch with John Eng-Wong, Visiting Scholar in Ethnic Studies at Brown University, who’s been working with Yeh on the Sweet and Sour Initiative. Eng-Wong was kind enough to do some research on my behalf.

“Almond boneless chicken seems to be well known and appreciated in Michigan, but it seems to have a foothold in many other places from Canada to Florida, ” he said.

A search of Chinese menus posted online confirmed that ABC is, in fact, a staple in eastern Canada (just across the Detroit River) as well as Ohio. And yes, it’s even occasionally found in Florida. I guess that disqualifies the dish as being a “Michigan thing.”