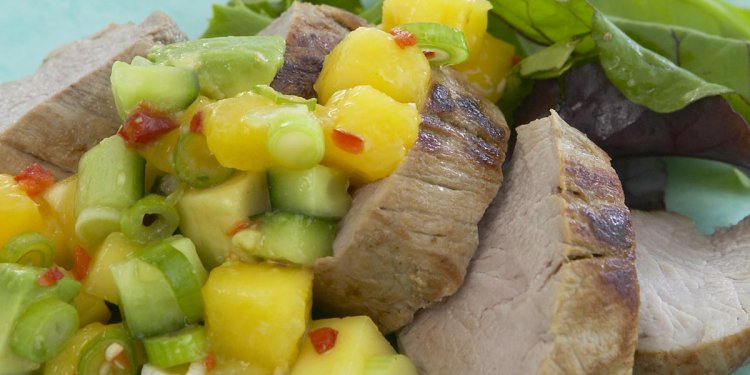 
I also started some sticky rice going... So, now, Craig takes over. The pork tenderloin has been wiped dry, and rubbed with a little vegetable oil. He grilled it on one side, for about 2 minutes...He flipped the tenderloin every two minutes, until the internal temperature reached 140F. I reserved about 1/3 of the sauce for later.

The glaze looks and smells wonderful- I can smell the garlic and ginger!

My mouth was watering with anticipation.

My husband yanked some home grown cilantro from our herb garden, which I chopped up and added to the slaw. It was time to eat.

Once the tenderloins were removed from the grill, the reserved glazed was brushed on...

The pork was covered with foil to rest for 5 minutes. Moi? I was poised and ready, and very hungry!

TASTING NOTES: There isn't a plated shot of the thin slices of pork tenderloin, mound of sticky rice and delicious cole slaw. Well, I took a couple, but I was pretty haphazard with my photography, and I didn't like the way they turned out. Trust me- this dinner was a total success. First, let's talk about the pork. This didn't exactly taste like the Chinese spare ribs I've had in China Town, San Francisco. But, that's minor. The Asian flavors all worked, and I absolutely loved the sauce! The pork tenderloin was tender, with just a little bit of pink in the middle, bordering almost well done.

The Asian Cole Slaw was the biggest surprise! I didn't make a lot of the slaw, but I had to quickly write down the recipe, so I could make this again. Craig raved about the slaw.

In my book, these recipes earned five stars. My husband says four on the pork, but he's partial to his own grilled Baby Back Ribs (which are pretty good, I must say). We had a lot of leftovers, which will become fried rice. At least, that's the plan. Little kitchen mice might get into them during the night- we shall see.
Source: www.afeastfortheeyes.net