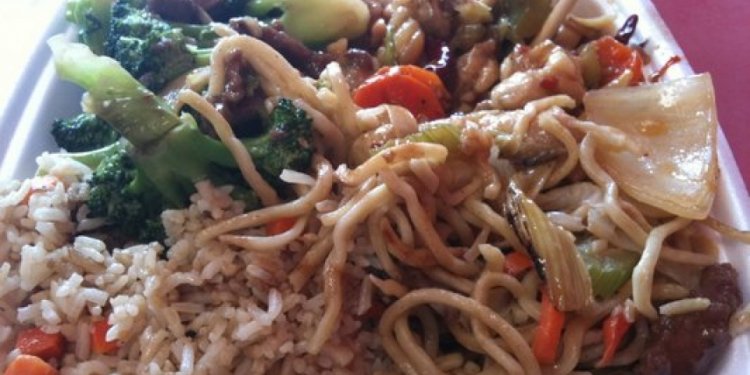 
Whenever people think of Chinese food, they naturally think of stir-fries. It's like the equivalent of Chinese cooking, but I think there's so much more to Chinese food. A lot of effort goes into the food, all the careful steaming to get everything done to perfection, the braising, the slow-cooking for tender and flavoursome food. It's not all quick, easy stir-fries. Chinese restaurants (or even hawkers) in Singapore are so so different from many of the Chinese restaurants in London which serve up MSG-laden sticky and oily deep-fried food.
That said, a good Chinese stir-fry is not that easy. Even with the exact same ingredients and recipe my stir-fry can never match up to that of my favourite tze-char stalls in Singapore. But no harm trying and everyone loves a hardworking student (I know, this is not exactly my schoolwork here but still), so here's the research compiled from surfing a lot of forums, watching a lot of Youtube videos, googling a lot of master chefs, and quizzing my mum. The heat distribution of a wok is quite different form that of a frying pan. If done right, that's how you get ever-elusive x factor called wok hei ("breath of a wok"). Also, because it curves in at the base, you can "deep-fry" garlic, shallots and ginger without having to use much oil.

I don't have this in London so I am forever inadequate but maybe not for long. I am seriously considering getting one when I get back in fall. It doesn't cost much, just a cheap one from Chinatown would make so much difference. My mum uses a cast iron one (see first photo; thin cast iron, not the thick cast iron Western-style casserole pots which are slow to lose heat but also slow to heat up) but a lot of people say a much lighter, cheap carbon steel one does a fantastic job for tossing your food, especially if it comes with a stick handle. You don't need a fancy non-stick one, and in fact you do NOT want a fancy non-stick one. That Teflon coating will burn at high temperatures and produce very harmful chemical compounds.

When you get a wok, you should always season it, and it'll last you forever. My mum has been using the same wok for..well, ever since she first moved into where we live now, which is almost since the day I was born, which is I guess about 20 years?

That intense heat is what brings about wok hei. The Malliard reaction when you caramelise meat and vegetables and noodles over a hot flame gives you that smoky depth to chinese food at tze char stalls or restaurants.

My flat comes with an electric stove, which definitely gives less than ideal results compared to an open flame. I guess I will forever be inadequate after all, at least while I'm still staying in that place. There is however a way to mimic the high heat you get from a fire, by heating the wok at the highest stove setting for 10 min before cooking (of course, you can't control the temperature as easily with an electric stove, so have another hob ready for transferring to when you need to lower the temperature).

Sautee-ing slowly over low-heat doesn't sear the meat and vegetables the same way, everything needs to be done fast, which brings me to the next point.

It's not always the more the better, in this case, more time is not better. It always amazes me how much time goes into the prepping of the ingredients but the actual stirfry is over in a matter of minutes. The best pad thai (I know it's not chinese, but it's an example of a stir-fried noodle dish) I had was done in less than 30 seconds.

With meat, I've always wondered how Chinese chefs get the meat so tender and smooth. So anyway, Ken Hom revealed the secret to this on an episode of Saturday Kitchen:

You coat the chicken or whatever meat pieces in egg white, cornflour and some rice wine, before cooking in warm (forums say hot. but the Ken Hom says warm..) water or oil, take it out before it's cooked, because it'll continue cooking on slowly, and then add it back to the dish at the end for a final heatshock. I was so fascinated I trawled the forums and found out some people use baking soda instead too.
6 months later, after experiments with all the techniques (baking soda/eggwhite, water/oil, warm/hot, velvet/not):
First of all, I think baking soda does work as a tenderiser, but I don't really like the effect of it.. The meat can feel mushy, and really, there's no need for disguising if you start with good, well-sourced, quality ingredients.

So, the basic marinade goes like this:
Seasoning, usually soy sauce, pepper, sometimes oyster sauce or fish sauce
Chinese shaoxing rice wine (something mildly acidic which tenderises the meat)
Tapioca/ Cornstarch. I prefer tapioca.
Sesame Oil.
And if you're doing beef, a pinch of sugar and a little stock helps it stay juicy as it reabsorbs the liquid.
And to finish, swirl in a slurry made from a combination of the above minus sesame oil to get a sauce.

I usually eyeball the amounts (like most Asian cooks do) so I can't say for sure, but look at Peppers and Cashew Chicken for a rough idea. You only need to marinade it for 10 min, usually while you prep your other ingredients. That's usually good enough, as long as you use the right cut of meat and follow the above other principles i.e. not overcooking it. Sear on high heat before tossing with the other ingredients.

Velveting is another technique to get a really smooth, glossy texture, which I reserve for more delicate combinations. Instead of marinating in dark sauces, I stick to salt (and the rice wine and tapioca starch still), so the chicken remains pristinely white. Then I toss to coat with lightly beaten egg white and oil (you only need a bit, 2 tbsp, 1 tbsp, for 500g), for about 10 more min. Instead of searing, poach it in barely simmering water with a tiny glug of oil added, till cooked on the outside. Drain, set aside, finish stir-frying your vegetables and making the sauce etc, before adding the meat back. Look at Velvet Chicken and Sugar Snap Peas.

Also, you can velvet prawns. This is not just for stir-fries. Ever wondered how Chinese dimsum restaurants get super bouncy 'crystal' prawns in your chee cheong fun? Credits to rasamalaysia for her extensive research into this. Prepare the prawns by slitting the back and de-veining, then submerge in ice water with 1 heaped tbsp of baking soda, for about 30 min. Rinse off thoroughly in cold water, then pat dry. Marinate 1h or overnight in a mixture of 1 small egg white and 1 1/2 tsp tapioca starch for 500g prawn. But again, I'm iffy about baking soda and am usually more than happy with the results from using fresh or freshly frozen prawns. Do this only if you like dimsum/have time to spare/really want to impress. See my very er scientific Sp icy Chilli Prawns comparison.

For meats like beef, a good sirloin or a much cheaper flank steak will do. Slice against the grain, and slice thinly. A tip is to freeze partially so you can slice really really thinly but I don't recommend that because you're more likely to end up overcooking it. Another tip is to slice at an angle so you get what looks like a larger surface area, which also absorbs more of the marinade.
For pork, use shoulder or butt, ditto.
For chicken, slice across the fibres of the meat instead of along, so you get short fibres, making the meat nice and tender. I like the dark meat because it's much more tender, and of course, cheaper!I can't really afford prime cuts on a student budget, so I always go for the cheaper options, or frankly, I more often just stick to stews made from all the tough unpopular cuts.
Source: www.mummyicancook.com